The time was always going to come when it would become apparent that capitalism just does not care: that time is now.

Earlier this year I wrote a Twitter thread explaining why the profits of energy companies would rise dramatically this year as a result of the fuel price increases resulting from the Ukraine war.

The reality is that the profits have not increased by as much as I predicted. I have a very strong feeling that energy companies will at this moment be booking every loss that they can find within their companies in a desperate attempt to disguise the scale to which they are benefitting as a result of war and the exploitation of people around the world. But still we get this: 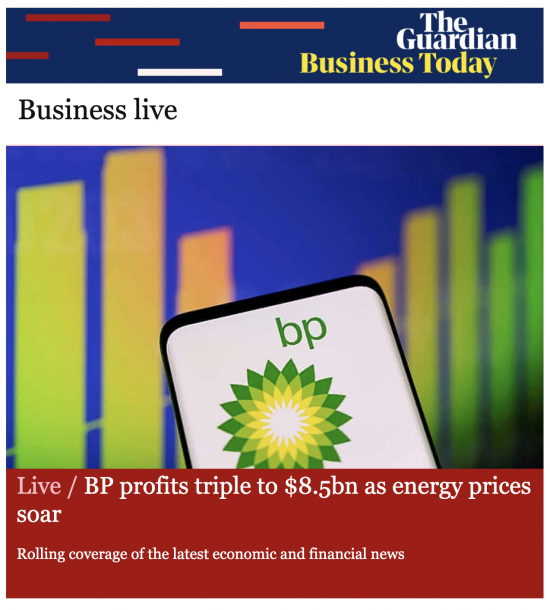 There is blatant profiteering going on here. War is being exploited and as a consequence people will die. In the meantime shareholders will laugh all the way to the bank, investment in fossil fuels will rise and the planet will burn.

What to do? I thought a tax would help. I still think it might. But the rate has to be close to 100%. This is what wartime situations demand when exploitation happens. Just read Keynes on the issue, writing in WW2.

The alternative is price capping. The government has to impose price limits. And if the energy companies withdraw fuel from the UK market as a result it will be clear who is causing this.

But what we are seeing now is blatant commercial exploitation of people as a result of which millions will be faced with the choice between food, heat and keeping their homes this winter. The time was always going to come when it would become apparent that capitalism just does not care: that time is now.