An agenda for Labour 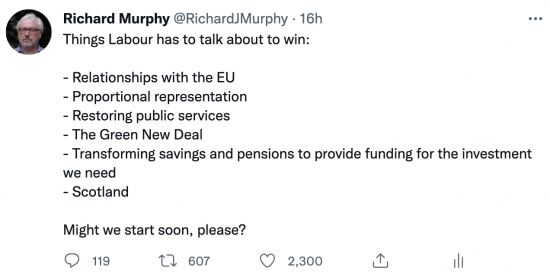 Then, because I was playing with new video production software I recorded a video of the arguments implicit in that tweet. This is not the highest quality production, by a long way, but seems worth sharing, even if rushed at the end:

Have I got what Labour needs to do right? On Twitter I saw reaction suggesting other issues, such as housing, ending tuition fees and waiving student debt, restoring free movement (which I think will take a long time), and inequality raised as well.

However, housing is in the Green New Deal. Education is, I think, covered in restoring public services. Free movement is not going to happen now, although airport queues seem to annoy people more than the ones in A&E do, which is staggering, and I do admit I missed out student debt and I think it really important.

We can’t have a successful transition between generations in this country and meet the baby boomers' desire for a comfortable retirement when the upcoming generation has debts and tax rates that make it almost impossible for that younger generation to buy the assets the older generations have to sell to fund those retirements, whether they be shares, bonds or houses. That’s just not possible and threatens the whole underpinning of the inter-generational contract, as well as financial markets. So I definitely missed that one off the list. The rest I stand by.