Why are we spending £3.7 billion a year subsidising ISAs when there is no return to the country for doing so?

The government has published new savings statistics this week, including this chart and accompanying notes: 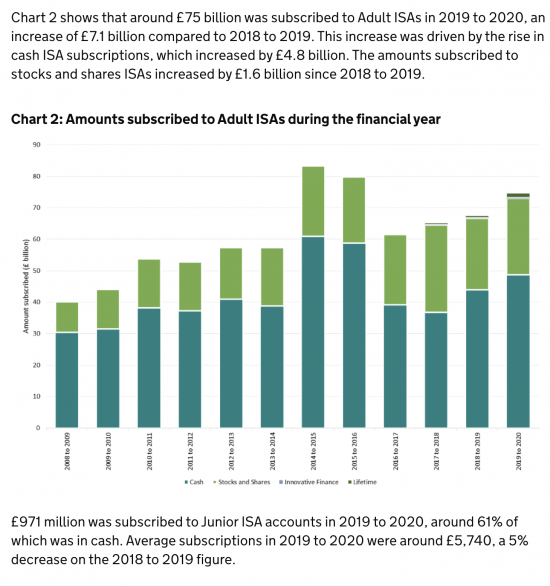 Note that the data is already considerably dated. But even so, there are some important things to note.

Second, based on advances in our understanding of banking over the last decade – starting with the Bank of England’s admission in 2014 that banks do not lend out the money deposited with them but do instead always create new money every time they lend – we now know that cash savings serve no useful macroeconomic purpose in the economy. They are simply temporarily redundant money, stored out of use.

Third, what we also now know is that many of the companies quoted on stock exchanges rarely if ever issue new shares now to fund investment. They are instead in a great many cases paying out dividends and buying back their own shares in greater amount than they have earned as profits. In that case the tax reliefs provided for investment in these shares, whether via ISAs or pensions funds, also appears to be wasted government subsidy because there is no payback to society as a result in the form of new investment or job creation as a result of saving via the ownership of shares in these companies.

So, the question is, why are we subsidising ISAs? And wouldn't this money be much better used funding the Green New Deal, as my colleague Colin Hines and I have proposed by requiring that all ISA funds be saved in high interest-paying Green New Deal bonds?