There is a magic money tree right at the heart of the UK government, mandated by law and in operation since 1866, at least

This paper was published last week: 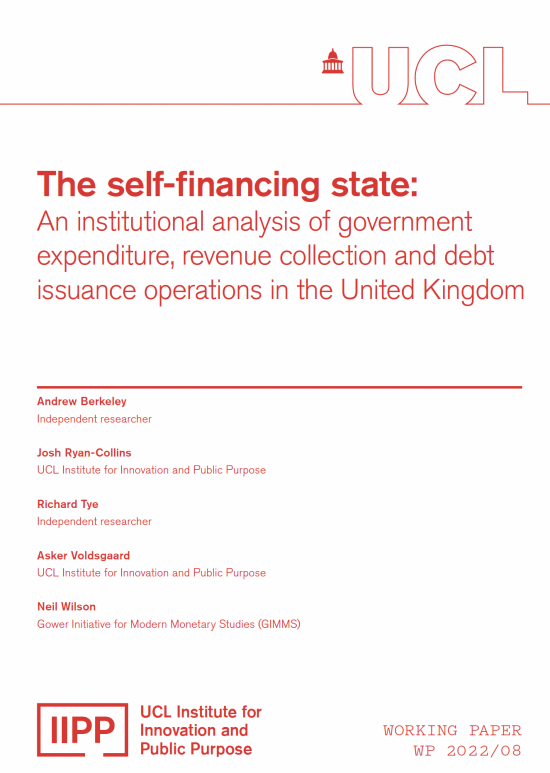 The paper has the following abstract:

This paper constitutes a first detailed institutional analysis of the UK Government’s expenditure, revenue collection and debt issuance processes. We find, first, that the UK Government creates new money and purchasing power when it undertakes expenditure, rather than spending being financed by taxation from, or debt issuance to, the private sector. The spending process is initiated by the government drawing on a sovereign line of credit from the core legal and accounting structure known as the Consolidated Fund (CF). Under directions from the UK finance ministry, the Bank of England debits the CF’s account at the Bank and credits other accounts at the Bank held by government entities; a practice mandated in law. This creates new public deposits which are used to settle spending by government departments into the economy via the commercial banking sector. Parliament, rather than the Treasury or central bank, is the sole authority under which expenditures from the Consolidated Fund arise. Revenue collection, including taxation, involves the reverse process, crediting the CF’s account at the Bank. With regard to debt issuance, under the current conditions of excess reserve liquidity, the function of debt issuance is best understood as a way of providing safe assets and a reliable source of collateral to the non-bank private sector, insofar as these are not withdrawn by the state via quantitative easing by the Bank of England. The findings support neo-chartalist accounts of the workings of sovereign currency-issuing nations and provide additional institutional detail regarding the apex of the monetary hierarchy in the UK case. The findings also suggest recent debates in the UK around monetary financing and central bank independence need to be reconsidered given the central role of the Consolidated Fund.

The paper is, in essence, a reworking of a paper published by some of these authors last year for the Gower Initiative on Modern Money, with less double entry.

The merit of the paper is that it works through the legal mechanics of government spending in the UK in detail and show that unambiguously spending has to come before tax or borrowing. It is as simple as that.

As a result the authors draw this successful diagram:

They reject the top model as they say this simply does not happen in the UK and promote the bottom model, which they show is exactly what does happen, even on a daily basis in the UK.

Other diagrams in the paper are not as successful, in my opinion, but this is the key idea, and one that will be entirely familiar to readers here.

As the authors conclude:

At the heart of the government spending mechanism is the Common Fund. This is best understood as a line of sovereign credit that the government, via permission from Parliament, draws on, backed solely by the ability to raise taxes in the future. When spending occurs, Exchequer credits are allocated to the Government Banking Service and shifted on to the Bank of England’s balance sheet as public deposits. This, in turn, creates deposits at the commercial bank accounts of government departments, thereby enabling spending. The process is legally mandated and cannot be challenged by the central bank or any other government department. We find the one-source view on public spending (Figure 1) reflects institutional reality, where all spending is financed by money creation.

The primary economic function of government debt issuance, in the context of the ‘floor’ reserve management system that the UK has today, is to support the desire of the non-bank financial sector for a secure store value and source of collateral. However, the BoE’s purchases of gilts withdraws the bonds back on to a public sector balance sheet and thus partly neutralises this function. This inconsistency among the DMO and the BoE in terms of government debt dynamics suggests that the UK monetary system could be simplified.

Their last word is:

Ultimately, from an institutional and economic perspective, there is a magic money tree, though it should be understood as a legislative money tree represented by the CF with recourse to Parliament. The true limits on the Government’s spending power are the productive capacity of the UK economy, the political will of Government and the consent of Parliament.

I suggest this is a paper worth reading.