The Baltic Dry Index has begun to fall: 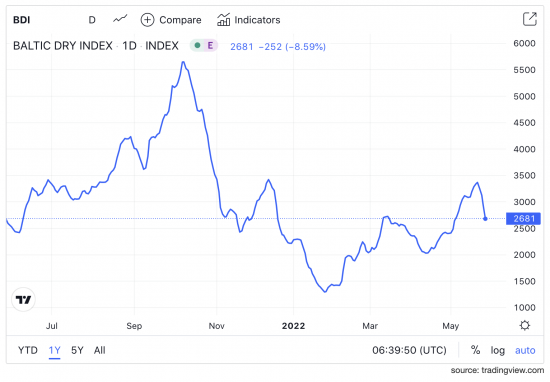 So what, you might ask? The answer is that this is what happens before recessions: 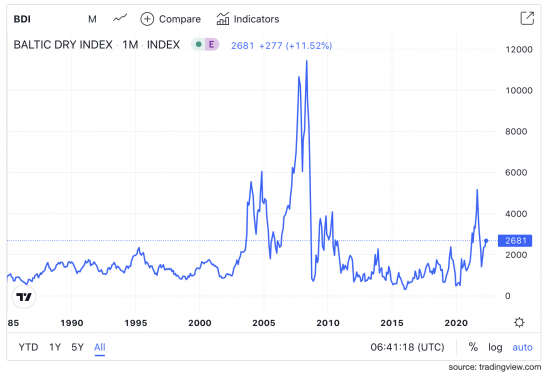 The pattern of increase in September 2021 was not as marked as that pre the 2008 crash, but it is consistent with it, especially as in the past week the trend in the index has been heavily downward, matching other key price falls noted by my colleague Danny Blanchflower in things like lumber and the collapse in the wholesale price of gas in the UK, which is not being reflected in household supply prices.

So what does the Baltic Dry Index measure? It is a measure of the cost of carrying various bulk cargoes, such as coal and steel. It is run by the Baltic Exchange in London, where such trades are made, and it has fallen near enough 20% in a week.

There are three explanations. One is that the supply shortages that forced the index up in 2021 have been resolved.

Third, demand for raw materials is falling as the economy slows.

All three are possible, simultaneously. In fact, I think that is likely.

But what that means is that demand is down and the pressure on prices is falling, for all three reasons. At best this means inflationary pressure will be declining fast, as Danny and I have been saying is likely. At worst, it means a recession is coming. But in that case macroeconomic policy, virtually around the world, is wrong as interest rates are increased rapidly to tackle supposed systemic inflation. Interest rate rises are exactly the wrong thing to deliver at this moment. Instead, what the economy needs is not just inflation sticking plasters but serious and long term investment. But, central bank delivered policy is all about crushing economies already deep in trouble.

I am not saying we have not got an inflation problem. We clearly have, in the short term.

I am saying I am not sure that this inflation problem will persist.

Instead what we might well face is a serious and unanticipated, and so uncontrolled, global turndown. And what we therefore need is fiscal stimulus now to deliver the economy we need - which is sustainable - and the planning for that needs to be happening at this moment. Instead, we are getting incentives for more fossil fuel extraction. Literally nothing could be further from what we need than this government's economic policy at this moment.