As the FT has reported:

Bank of England governor Andrew Bailey on Monday said he was unable to stop UK inflation hitting 10 per cent this year, as he admitted sounding “apocalyptic” on food price rises.

As I tweeted yesterday: 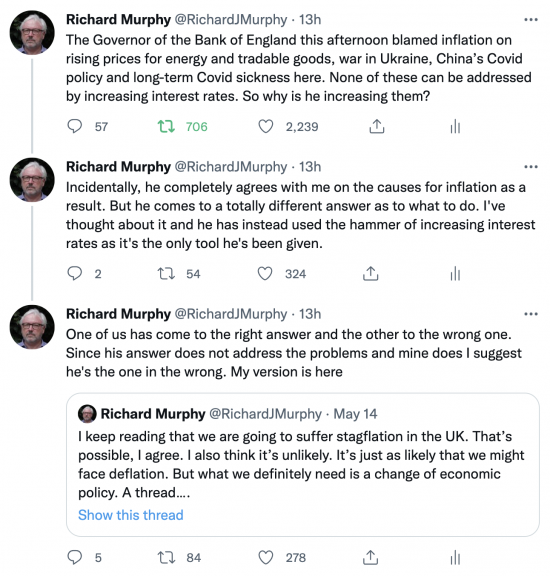 The link in the third tweet was to my recent thread on this issue, available here.

As I added this morning:

In summary, the Bank agrees inflation is beyond its control.

It also agrees it has no appropriate tools to tackle the inflation we have.

It seems to agree that the inflation we have is of a type we have not seen before, as I have suggested. This is disaster capital inflation, not cost-push or demand-pull. Profiteering-exploitation inflation, if you like.

“This is the biggest test of the monetary policy framework for 25 years. This is when both the independence of the bank and the [2 per cent inflation] target matter more than ever.”

Except, of course, that they are not, because Bank of England independence is a sham and the 2% target is arbitrary. Both are just crutches for an economic policy that has achieved nothing for thirty years.

We need new thinking. I have offered it. But it's not going to be heard because the Right is intent on imposing hardship and Labour and the SNP are doing nothing of substance to oppose them, for reasons barely comprehensible.