The ONS claims that the national debt in March 2022 was £2,344 billion. But that is not remotely true. The real number was £986 billion. So why are they publishing false accounts?

The Office for National Statistics has published its first estimate of the UK's national finances for the year to March 2022.

The data is deeply misleading in most cases. Income and receipts and accruals and payments are widely confused in deeply misleading ways. In the web post it is not acknowledged that many of the figures published refer to very different measures of debt, which would leave anyone not knowing that there are about six to choose from deeply confused. As a result the publication could easily be considered misinformation.

I engaged with the ONS extensively on this issue 18 months ago. I now regret not publishing that research because it was deferred thinking it might go to an academic journal, but then all the colleagues I had involved decided that it was unpublishable as the issues were too complex for such journals to handle. I do not think that would have been the case here.

Let me, however, deal with one issue, which I have been asked about. That is the so-called Bank of England contribution to the national debt.

The Bank contribution is calculated in summary (with some estimated data used by the ONS excluded from account) like this: 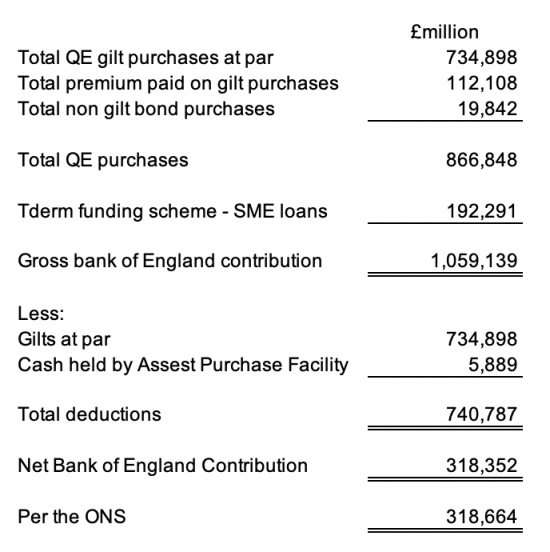 The data comes from Table PSA9A here. Note that all these figures are deemed to be liabilities.

Now note this, which is the last published balance sheet for the Bank of England: 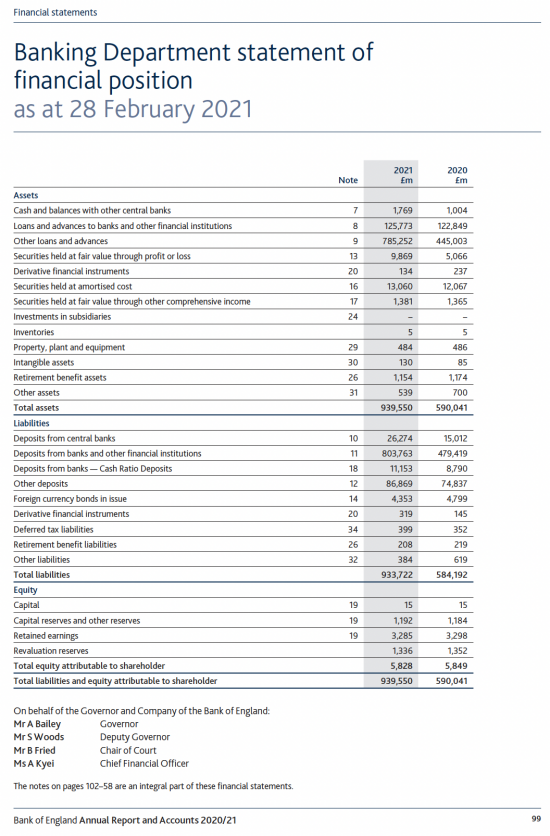 You will note that there is no number remotely like the figure of £318 billion which the ONS refers to as the Bank of England contribution to the national debt.

So let's be clear about what there is on that balance sheet. Note 8 shows this:

The term funding scheme is in there. It had just grown a year later.

Then there is note 9:

The £773 billion was the loan to the Asset Purchase Facility used to buy the gilts and other bonds acquired using QE: the value of assets held by them is very similar to the loan advanced and had gone up by March 2022.

Now note that these sums I refer to, and which the ONS refers to, are assets. They are not liabilities at all. The Bank of England balance sheet makes that clear. A liability is a sum owing. In contrast, an asset is the value of an investment or in the case of a bank the value of an advance to a customer that they think they might repay. So what is the Office for National Statistics doing describing assets as liabilities when they aren't and including them in debt when there is clearly no debt owing as a result of the matters they describe? There is no reasonable explanation. It's as if they cannot read a balance sheet. What is undoubtedly true is that their presentation is confused, to the point of being wrong.

That is confirmed by looking at the rest of Bank of England balance sheet. There are only two serious liabilities there. One is explained by note 11:

I have summarised the Bank's balance sheets since 2009:

These central bank reserve account balances grew near enough, although not precisely, in response to rising quantitative easing or other loan fund injections by the government into the economy. My request for further data from the Bank of England to explore this link has been ignored by them despite being made under Freedom of Information rules, and their acknowledging it several times.

The other deposit balances are explained by note 12:

The £78 billion simply represents banknotes in issue. The rest is inconsequential.

What we have in both these notes 11 and 12 are sums described as liabilities. However, the curious fact about central bank reserve accounts is that commercial banks cannot get rid of them. They can transfer these balances between each other but this 'base money' differs from commercial bank-created money in that it is made by the central bank, and only it or the government can get rid of it by either taxing more or selling more bonds to the market. The balance on these central bank reserve accounts is beyond the commercial banking sector as a whole to control because they are the centrally created base money supply that they must use. So, this liability is not repayable at all in any real sense. And nor, come to that are banknotes. We know they can only be repaid by using another note. So they are not a liability in any real sense either.

So, how come the Office for National Statistics claims that the Bank of England contributes £318 billion of liabilities when what they describe as liabilities are assets, whilst they ignore the Bank's actual liabilities altogether?

I have been told two stories to justify this bizarre accounting. The first is that because the loans advanced to clearing banks to fund the SME loan schemes are due for repayment after more than one year the ONS cannot consider them to be assets, and so they must knock them off the net worth of the Bank of England balance sheet, but still leave the matching net central bank reserve account balance that they create as a liability. The bizarre assumption implicit in this is that the entire UK banking system will go bust sometime soon.

The second claim is that the premium paid for the gilts acquired by the Bank of England under quantitative easing is not an asset because only the par value will eventually (probably many years hence) be repaid. This is another nonsense: what the premium paid represents is prepaid interest that needs to be expensed over the remaining life of the assets in question, which is in effect what the market does, assuming no change in rates. But the Bank says it must be written off straight away.

In other words, the Office for National Statistics is, in creating its accounting for the national debt assuming assets have no worth because they will take more than a year to be repaid but all liabilities, whenever due, must be taken into account.  To achieve this outcome the Office for National Statistics is effectively saying that the audited Bank of England accounts are not true and fair at all and actually include assets they do not think of any worth, even though it is clear that is not true. They then write those assets off and claim as a result the Bank of England has a deficit of assets which they then call debt.

If that sounds like contorted logic, trust me that it is. The kindest possible interpretation of this is that it is deeply muddled thinking. It is also very obviously wrong: as a matter of fact the assets clearly do exist and as such do not need to be written off. And so the obvious fact is that the national debt does not include this literally made-up figure of £318billion. That means that the national debt cannot exceed £2,025 billion (as noted above).

But there again, that figure is also wrong. At 31 March 2022 the central bank reserve account balance at the Bank of England were £951.8 billion. There were £87 billion of notes in circulation. Thee must be matched by assets, and as noted in the audited accounts these are of value at the accounting values attributed to them and none need writing off  - which is why the £318 billion adjustment is wrong. But what is also true is that if the Bank of England has these credit balances on its balance sheet they should not be ignored in national income accounting. However liabilities cannot be counted twice, and what that means is that to include the gilts that the Bank of England owns as liabilities in the ONS data is false accounting (I use the word advisedly, and the Whole of Government Accounts agrees with me, so I am correct in saying so). You cannot owe yourself money. As a result, the country has not got a debt when the government as a matter of fact owns the bonds or gilts it has issued.

Alternatively, there is another way to make this adjustment. That is to say that if the gross debt is £2,025 billion (and it cannot be more) then of that sum the balances held on central bank reserve accounts and banknotes should not be treated as debt because they are not debt as such: they are the core money supply that the government makes available to make the country's finances work. They are, in other words, the financial capital of the country.

There is, as it happens, an odd similarity between capital and liabilities on a balance sheet. They are both credit balances, but otherwise they behave very differently. One is repayable and the other is not. The money the government has created is not repayable at the choice of anyone but the government. This is a simple fact. It can be repaid if the government so wishes, but otherwise it cannot be, and until the decision to repay it is made it is not a liability, but capital.

So, in that case the true actual liabilities owing by the government may be the so-called debt due of £2,025 billion less the part that is really cash balances created by the Bank of England of £1,039 billion (£952 billion of central bank reserve account balances and £87 billion of notes) meaning that the national debt is no more than £986 billion.

And if you are wondering what the difference between these two figures is (£1,178 billion and £986 billion) it happens to be £192 billion - which are the assets owned by the Bank in the form of loan balances made available to commercial banks that were injected into the banking system via the central bank reserve accounts for supposed onward lending to SMEs. And, as these are assets unless (as previously noted) the whole banking system collapses, I think the lower figure for liabilities is correct as there are assets to take into account that the Office for National Statistics not only ignores, but actually treat as a liability, so doubling up their error.

Shall we, in that case, stop obsessing about the national debt, welcome the fact that there is national capital of £1,039 billion, which is represented by our money supply, and that the government has the capacity it needs right now to assist all those who require help in the economic crisis to come? I think we should.

But what we should also do is demand that the Office for National Statistics stop accounting for assets as liabilities and demand that they treat the money supply as what it actually is, and stop pretending - utterly falsely - that there are debts in issue that do not exist.

We are used to having a Prime Minister who does not tell the truth. We expect the Office for National Statistics to be honest, but they aren't being so in their national debt accounting, at cost to us all.  And that is unacceptable right now when it means that necessary services are not being supplied by the government.