The Tory’s approach to fraud is undermining the UK

My article in The National yesterday was tweeted by them using this, slightly worrying, image: 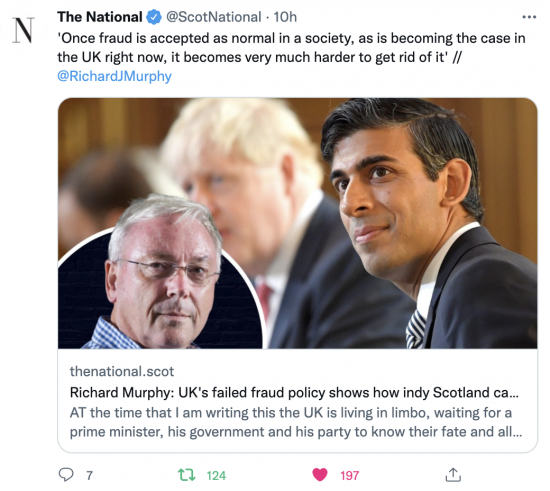 Once fraud is accepted as normal in a society, as is becoming the case in the UK right now, it becomes very much harder to get rid of it. Scotland will, however, have the chance to reset its approach to this issue when it becomes independent. If its economy is to work then; if business and the people of the country are to be protected from fraud; if there is to be fair competition and if all taxes are to be collected at that time then a very strong policy on corruption will be required. The reason is simple. Keeping fraud to a minimum gives a country a competitive advantage over neighbours that do not. Westminster may be indifferent to fraud but Scotland must never be. And by not being so Scotland will win, handsomely when the Tories are, right now, literally choosing to be losers.

Staggeringly, the Tories do not seem to appreciate that, which shows how out of touch with their roots they are.