Boris Johnson lost one ethics adviser over Priti Patel's bullying. Finding another was hard. It was not the most alluring proposition for anyone who knew much about what the job might entail, but then up stepped Lord Geidt.

Now he has been made to look a fool by Johnson, with the Electoral Commissi0n finding that Johns0on lied to Geidt about his knowledge of the payments from third parties to redecorate the Downing Street flat. The consequence is this front cover of the Telegraph: 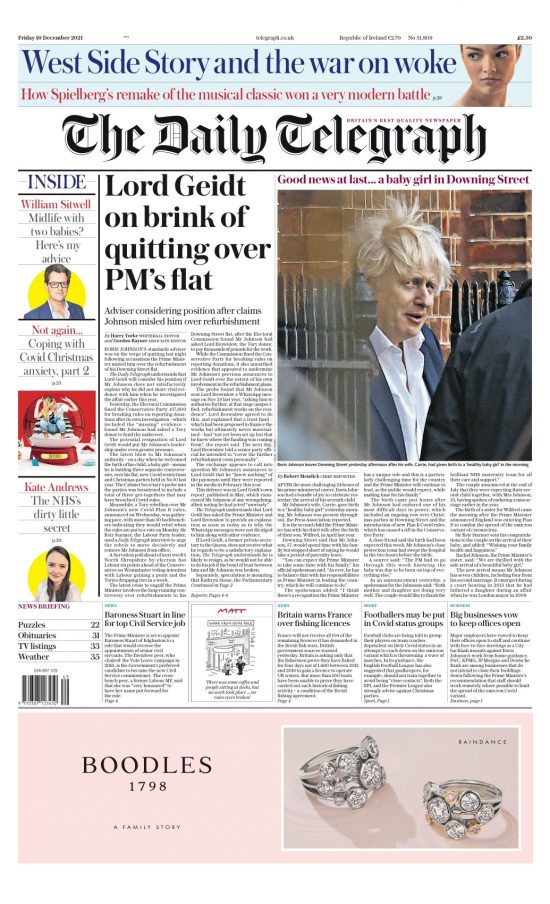 Losing a second ethics adviser would really not look good, even if it would only prove what we all already know, which is that Johnson is entirely devoid of any ethical concern.

I lived through the corruption of the Tory Party in the 1990s. I thought they would have learned the lesson. But Johnson then became an MP in 2001. It was clear that they had not learned. His track record of deceit was already known by then and became very apparent to the Tory leadership soon thereafter.

There are two conclusions to reach, although neither is in any sense revelatory. They are that Johnson is corrupt, as is much of the Tory Party in its pursuit of power at all costs.

Some of us still hope for better.

The fact is that most people in this country deserve better.

And the reality is that unless we get better then I strongly suspect that Scotland, Northern Ireland and Wales (probably in that order) will all leave this sinking ship.

I believe that most people are decent. Even some Tories undoubtedly are. And that is why I also believe that there will be a backlash against this corruption now. All I cannot predict is the form that backlash will take, as yet.