The Office for National Statistics has issued new GDP data this morning. Their tweets say: 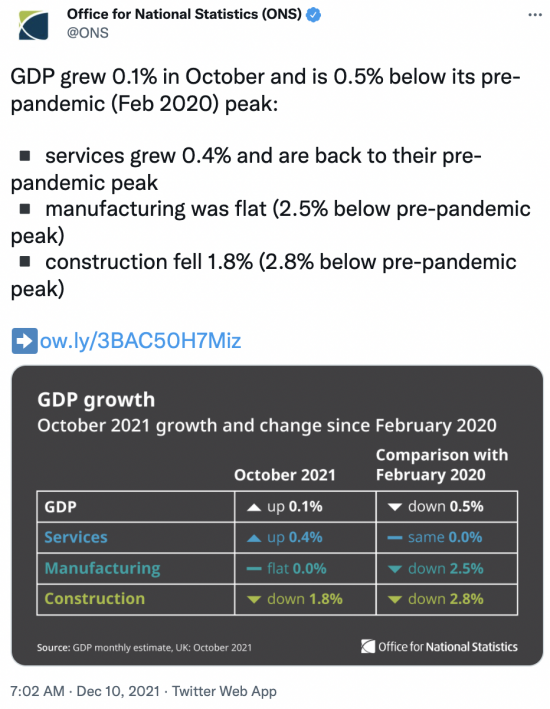 Mainstream economists believed that the figure was going to be more like 0.5%, with that being used as further justification for interest rate increases.

They were wrong. They were also actually more wrong than the headline data even implies. Take this next tweet from the ONS: 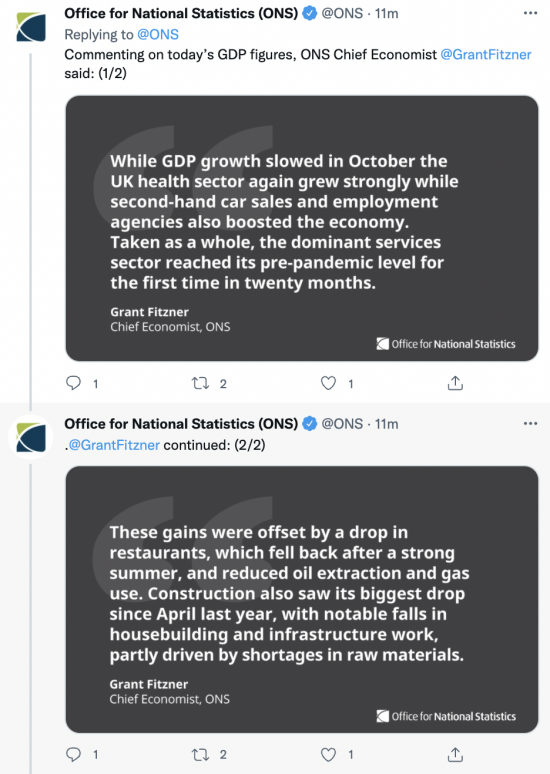 First, second hand cars contributed only because of a shortage of new cars - meaning that this was a measure of stress and not success.

Second, the fall back in restaurants showed that as autumn arrived the sensible part of the population who had been eating outside during the summer simply stopped going out. The Covid impact on the economy was far from over.

And as for the construction fallback, the sign is very clear that the supposed spending boom after Covid lockdowns ended is over. Already people are pulling back and are keeping their cash expecting there to be worse to come.

Now remember what was being said in October by the likes of the Bank of England. They were saying that the economy was heating, that interest rates would need to rise soon, and that there was a real risk that without intervention inflation would continue.

What we are actually seeing is what Danny Blanchflower and I suggested was the case. This was an economy that had already heated, and where it was only supply chain issues that were causing any economic stress. As we argued, there were no underlying causes of concern, sorting supply chains apart, and since increasing interest rates could do nothing to sort those out there was no evidence of any need for a reaction from the Bank of England.

Danny and I have been proved to be right.

The economy was not overheating. Indeed, if supply chain issues had been taken out of the equation there could have been a drop in GDP in October.

The moral is straightforward. The Bank of England needs to get its head out of the textbooks and at the very least take a walk down the Mile End Road - which is the route out of the City to the northeast which very rapidly reveals what is going on in the real economy in a way that the rarified atmosphere within the City walls never does.

So, a quick note on what is happening now? The economy is in decline. The service sector will be having a more difficult time. Spending, Christmas apart (and maybe not even that) will be under tight rein. The last thing we need is an interest rate rise.

What we do need is a Chancellor at the Desoptach Box saying what he is going to do to aid the economy.

Will we get the economic policy we need? Only if the Chancellor and the Governor of the Bank take that walk down the Mile End Road and so many o9thjer streets like it across the UK.