Is the Bank of England really independent of the government?

This notice has just been issued by the Bank of England: 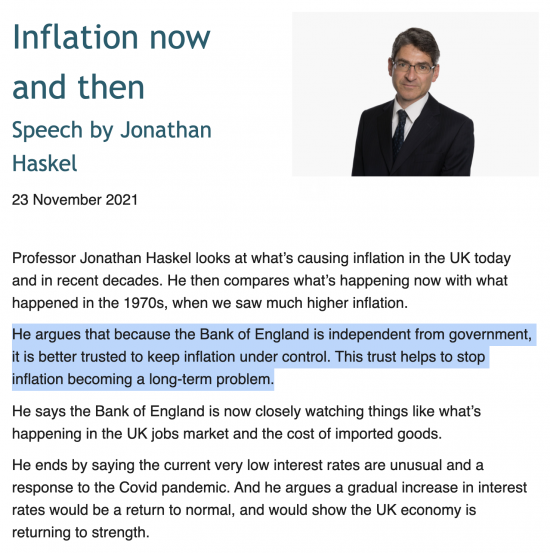 I added the highlight. I do not agree with the claim. My reason for doing so is section 19 of the Bank of England Act 1998, which says:

In other words, the Monetary Policy Committee is free to decide what it will do so long as it offers opinions with which the Treasury agrees. If the Treasury disagrees it can simply overrule the committee.

Of course, it can be argued that this is, as it is described, a reserve power. However, anyone sitting on the Monetary Policy Committee (MPC) will know that this reserve power exists, as will the Governor of the Bank of England. As a consequence, you can be quite sure that nothing that the MPC does happens outside parameters agreed with the Treasury. I am entirely confident that mechanisms to convey sentiment on such issues will exist.

In that case, is the Bank of England really independent of the government? I very strongly suggest that it is not. Instead what is being played here is a two-part game. One part gives power to a financial elite. The other part lets it be pretended that this elite holds the government to account. The reality is that this is like a tango: whatever supposed stress there is in the relationship is very carefully choreographed. As a result, I do not buy Professor Haskell's argument.

Worse though, I do not like the pretence implicit in this relationship between the Treasury and the Bank of England. Monetary policy in the UK should be under democratic control. The suggestion that it was not was always deeply subversive, and profoundly neoliberal. It is time that this supposed power that is granted to an accountable group was brought firmly back under Parliamentary supervision.