Sleaze is unacceptable but has become the modus operandi of this government.

This morning headline from the Guardian’s daily briefing of stories is pretty telling: 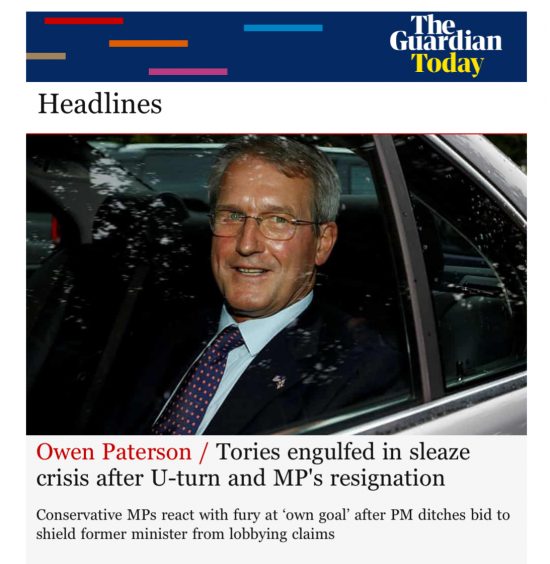 However, Keir Starmer has followed a different line on this. He has called this a corruption scandal, and did so in a careful legal manner, justifying it under questioning from Laura Kuenssberg.

For those not familiar with the scale of this issue, this Tweet seems to be a fair summary: 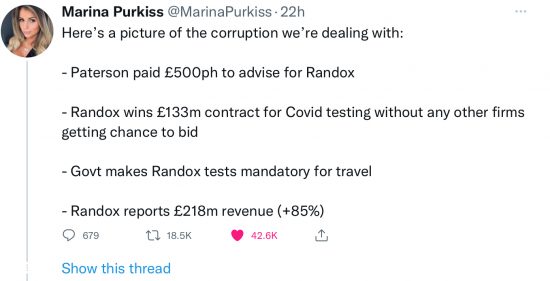 The  complaint about Paterson first arose in March 2019. Despite this in March 2020 it got the sole PCR contract from the UK government, for £133 million, without tender being required. That has now been increased, apparently, by a further £347 million. And it is Randox tests that have had to be taken by those travelling. In addition, if you saw the Channel 4 Despatches of testing that criticised standards in testing labs, that was reported to be about Randox.

It could be that there was no alternative but use Randox. But what is still undoubtedly true is that Paterson was paid, considerably. He also did lobby for Randox, as the Commissioner for Standards found, and Randox has undoubtedly gained considerably at a time when we know that there has been a contractual bias towards those known to ministers - and Paterson as Carrie Johnson’s former boss remained in favour with power even after he returned to the back benches.

The possible links between Randox’s good commercial fortune from this pandemic and Paterson are not proven. I make that clear. And they certainly do not prove corruption on its part. But we have to assume that Paterson knew what he was doing, and he did gain considerably from this. Call it sleaze, or corruption as Starmer does, the story remains the same and is that for all the crocodile tears Paterson might shed about the harshness of public life, and the sympathy he seeks to emote because his wife did kill herself, which is a reason for sympathy but not for excusing his actions, there is a scandal here.

That scandal is that Tory MPs were willing to favour particular companies without any attempt to follow due process. Randox was far from the only beneficiary of a contract issued without tender to a company known to a Tory MP and it may be guilty of nothing more than having one in its pay, but it is anyway the bigger scandal that needs investigating.

Sleaze is unacceptable and became the modus operandi of this government. That is the real story.