Carbon counting is ultimately not what matters when it comes to climate change: getting rid of carbon is what matters

As the FT notes this morning: 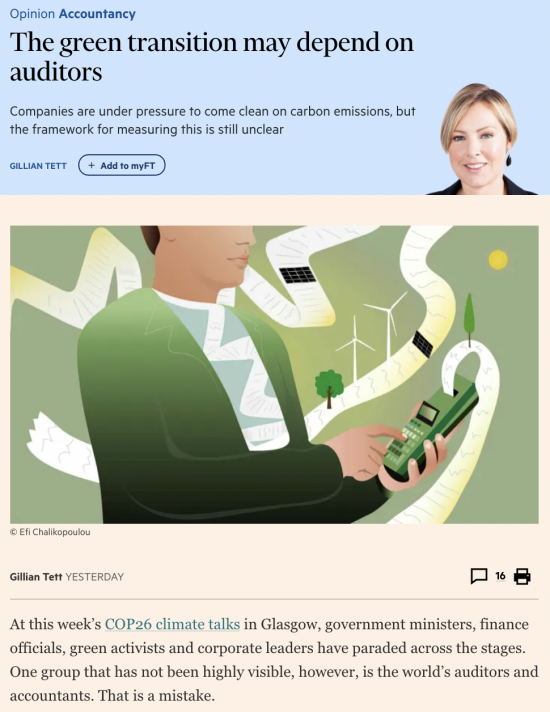 As Gillian Tett also noted in her article:

[W]hile the corporate and government pledges emanating from the talks have often provoked as many questions as answers, one issue is already clear: climate change action is about to put corporate auditors under the uncomfortable — and unaccustomed — glare of the spotlight.

Tett is absolutely right. Auditors are not ready for this, and whilst the UK government is trying to make matters easy for business - by, for example, only demanding that UK companies must show how they will become net-zero without actually demanding that they follow through on the plans - they are seemingly unaware of how much this really does impact the audit.

The fact is that auditors have a duty when issuing their report on financial statements to make sure that the hard numbers in the back end of those accounts can be reconciled with the soft, narrative driven, statements made by the directors in the front end of that same financial report. I would rather strongly suspect that ministers have not realised that as a consequence of demanding that a company have a plan to be net-zero they are, in effect, demanding that the numbers of that same company be restated to be consistent with that plan.

Now comes the rub. The reality is that once the company has a plan to be net-zero it has, in effect, agreed to close down its existing business model which is, in the case of every large multinational company currently in existence, carbon driven. In its place, if that company wishes to be a going concern it has to create a new business model. This, in turn, if it is to be considered viable and so be considered a part of a going concern, must require additional investment. These consequences are not just possibilities: they are inevitable.

That inevitability does, however, have further consequences. In particular, once a board of directors has adopted a plan that will involve cost in closing a current activity - and I very strongly suggest that this is what is implicit in the transition to net-zero - then they have no choice but make a provision to reflect that cost in their accounts. The provision in question is their current best estimate of the entire cost, net benefits, of making that transition. The net of benefits points is critical: prudence must apply because plans cannot be guaranteed to deliver. The making of this provision is, of course, at the core of my suggestion for sustainable cost accounting.

I suggest that auditors should welcome that proposal for sustainable cost accounting because what it does is translate the front end commitment to net-zero within any set of financial statements into a back end set of numbers that auditors are familiar with reporting upon. In other words, by requiring the plans be translated into numerical format, with costs that can be firmly identified within the general ledger of any company, and with reporting on progress with these plans then becoming a normal part of financial reporting, auditors can get their heads round an issue which at present confuses them, which is carbon accounting.

I say this for good reason. Carbon accounting is not what is important. It is, to some degree, no more useful than counting covid cases except as an indicator of required action. The value of the indicator is that we know that action is required. But, what saves people in both cases is the resulting action, not the fact that the indicator is 100% reliable. This is precisely why solving carbon accounting issues is not, at present, a priority. Good enough is, in fact, just that when it comes to carbon accounting: so long as we know that the company has a significant problem (and it is likely existing systems can provide good enough indication of this)  then matters is what is going to be done about it.

Sustainable cost accounting is not an indicator. It is, instead, the statement of financial commitments to the delivery of a solution. This is what matters in the future of financial reporting with regard to net-zero. The sooner the accounting profession realises this the better it will be for the planet.

Green battles are no longer only being waged with placards on the streets or on government podiums, but in corporate committee rooms too. Perhaps it is time for activists to retrain as auditors — this new front in the climate war could yet turn out to be a potent force for change.

This campaigner hap[pens to also be an accountant with real-world audit experience. And I am waiting to talk in any corporate committee room where are those who want to listen.