The vain futility of financiers

Bankers like to think that they are the masters of the universe.  Central bankers are the worst kind of bankers in this regard. The actions of the current and previous Governors of the Bank of England are evidence of this today.

As the FT notes this morning:

Nothing that this interest rate rise will do will in any way solve a lorry driver shortage. Nor will it solve a gas crisis. It will not out Turkey's on plates at Christmas. It will not fill an empty shelf anywhere. And they, and not excess demand arising from a surplus of earnings in the economy, are the cause of the inflation that we are suffering. Nonetheless, Andrew Bailey thinks he has to be seen to do something. He has backed himself into a corner where he has no choice but do so. And as a result, rates will rise.

The consequence is that hard up people will see their interest payments rise on loans, which will make life for them tougher still. The result will be to tip the mood ever so slightly more towards recession in the UK, which no one is seeking. And in a year, every cause o this inflation will have disappeared, and the inflation with it. But the legacy of cost for households will remain. Such is the folly of central bankers.

And then there was Mark Carney. As the FT again notes: 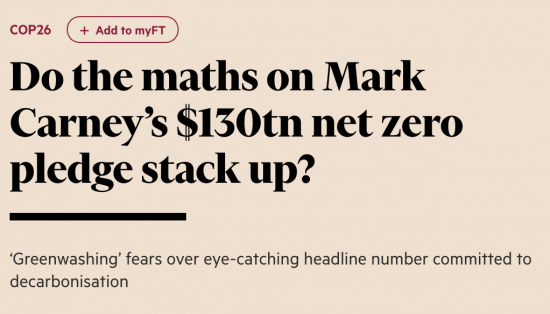 Mark Carney has announced the GFANZ - the Glasgow Financial Alliance for Net-Zero. It sounds good. He says $130 trillion of assets are available for investment. But that is simply not true. The gross assets of those saying that they will commit to net-zero are not all available for that purpose.

For a start, large parts of the portfolios of the banks in the GFANZ are invested in mortgages and credit card balances. Those are not going to become very green very soon unless we are going to see mortgages only offered on A-rated houses and credit cards can only being used for buying low carbon items. Neither seems in the slightest bit likely, at least not unless banking is going to change in ways I really did not expect.

There is then no good reason then to claim that $130trn of assets have been committed to this task. Greenwash really does not help.

It helps even less when the new accounting rules that will come out of COP26 also have their roots in Mark Carney's work - and they have to be credible. For precisely that reason I really want Carney's proclamations to be as credible as possible. This one was not. Everyone needs to do better than that. It would help if they did.