At a macroeconomic level, this budget is built on make believe by a Chancellor out of touch with reality

There is one chart, above all others, in those produced by the Office for Budget Responsibility that really reveals the assumptions that have been made by the government when presenting the budget. That is the graph for the sectoral balances.

The sectoral balances are based on an accounting equation. The equation is quite a simple one. It says that for every borrower there must be a lender. That, of course, has to be true.

The equation also says that there are only four sectors in the whole economy. They are the government, the public, companies and overseas i.e., those people who choose to leave their money in the UK even though they themselves are not resident here.

The accounting identity that underpins the sectoral balances is really very simple. As a matter of fact (and double entry accounting does, as a matter of necessity require this) the net borrowing and lending of these sectors must add up to zero.

This is the chart of the sectoral balances included in today's publication from the Office for Budget Responsibility: 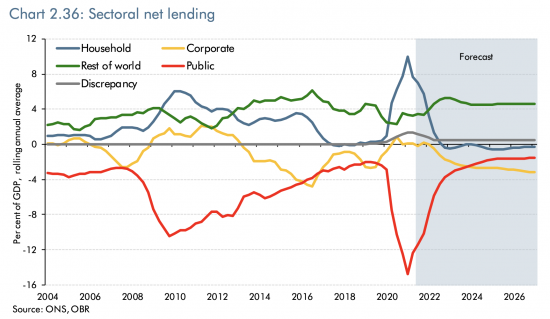 What it shows is very easy to explain. It says that despite the fact that we have had Brexit, and despite the fact that this threatens the stability of the UK financial system and London as a financial hub, more people from overseas are going to leave money in the UK than they have customarily done to date, looking at long term trends. I have to be honest and say that I think this unlikely.

Then look at the line for households Where the claim is that over the next five years households are going to be net borrowers i.e., we are all going to spend our savings and then overdraw our bank or credit cards to fund our lifestyles. Now, given the poverty that the government is seemingly wishing to impose on the country that may be true, but it also suggests that there is a coming debt crisis in UK households because this really is unsustainable borrowing. Alternatively, and given past patterns of behaviour, it could be entirely reasonably concluded that this is total nonsense.

After that, look at the corporate line. What the government is predicting is persistent, high level, and ongoing levels of corporate borrowing. I am aware that this happened from 2012 to 2016, but the world was very different then. Most UK companies now have record levels of debt already on their balance sheets. Most companies already face difficulty in repaying the debt that they have incurred to keep them going through the covid crisis. Banks are very reluctant to lend at present as a consequence, precisely because companies are already maxed out on their credit. So, what is the likelihood that this is going to happen? I would suggest that it is next to zero.

Finally, we come to the government borrowing line. As you will note the forecast here is that there will be a very rapid improvement in the government's financial situation, with borrowing falling heavily. But note what I have already said in this post. This can only be true if the other 3 sectors behave as the government is forecasting, and as I have noted, each of them would have to act aberrationally, given the facts that we know, for this to be true. The likelihood that anyone of those forecasts is wrong is high. There is a significant chance that they are all hopelessly optimistic. In that case what chance is there that the government will cut debt as this forecast from the Office for Budget Responsibility predicts? I would very strongly suggest that it is close to zero.

The reality is that, as has been the case ever since the Office for Budget Responsibility was created in 2010, its forecasts are wildly optimistic with regard to debt. As a result, the fiscal rule that Rishi Sunak has laid out today has little or no chance of working as he predicts. The government will be in significant debt over this period, and that is without even taking into consideration the similarly wildly optimistic growth forecasts that the Office for Budget Responsibility has also made.

Put simply, at a macroeconomic level, this budget is built on make believe by a Chancellor out of touch with reality.