Despite everything that is happening in the real economy the stock market is sailing on as if all is well in the world. But then it was ever thus. Just as Tory leaders enjoy the support of their party until the moment when they do not, so are stock markets worth what punters claim until their confidence evaporates. In both cases, the faith in the myth disappears at about the speed of air leaving a bursting balloon. 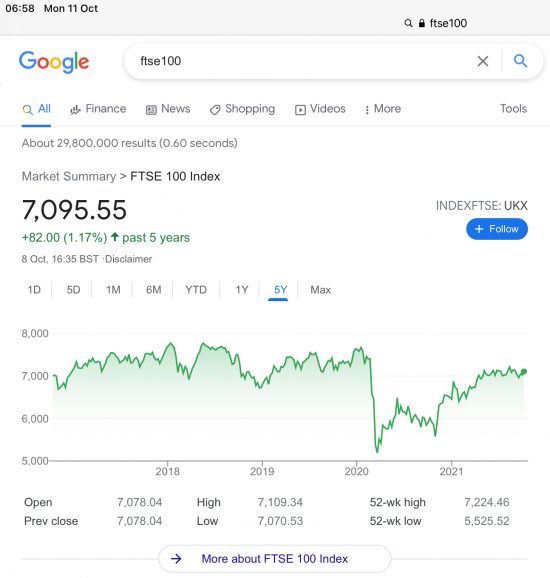 Right now we all know the UK government is pushing the economic self destruct button, but the whole world is facing real economic issues. There really are energy prices increases, worldwide. Supply chain issues are universal because of chaos in worldwide shipping, although the FT claims this situation is improving. And the required skills mix is different from that which people have to offer in many countries, even if most have the advantage of free movement to help sort out the resulting problems.

The result is that there is a widespread fear of inflation that extends far beyond the UK. That there will be inflation this winter at rates ahead of those that central bankers artificially target (since none can really explain what is so magical about their two per cent chosen rate) is seemingly certain in many countries. I continue to think there is no reason why that should continue and, therefore, no action is required to address this. Those desperate to prove that central banking still exists and still has a purpose (both of which are in considerable doubt) argue rates must rise.

Now, it is true that the supposed corollary of increasing interest rates is that shares increase in price because bond prices fall. But we have not seen inflation for a long time and that driven by real economic woes in the underlying economy is much rarer still. In that case the assumption that this relationship holds is dubious: rates can fall and share prices can take a simultaneous hit when monetary policy is inappropriately used to squeeze demand when all the problems in the economy are already on the supply side and hitting life’s essentials rather than the demand for supposedly vainglorious fripperies that rising interest rates target. It’s possible, in other words, for there to be a hit in both financial markets if monetary policy is used to make life generally worse for people.

An increase in interest rates now, which central bankers so clearly want, would make life worse for most people in the UK. What is more, there are few for whom it might improve anything much, not least as there is no guarantee that any increase would be translated into improved saver rates, and so it is entirely plausible that the Bank of England could trigger a financial meltdown. The best chance of avoiding them doing that might be if savers rumble the risk first, and start off loading shares anyway.

Why would they do that? Because the reality is that stock markets are very likely considerably over-valued. So far no one seems to be talking about a change in that value to reflect the mood of the moment. That’s because that might give the Bank of England what they would think to be justification for even greater (but still inappropriate) intervention. But just give it time. There is every chance for those in charge of our economy to make things much worse yet.