Has the winter of discontent begun?

That there might be a time when the anger of people at the suffering imposed upon them by this government might spillover has been a recurring theme on this blog for some a while, both in my comments and in those of regular commentators on it. This morning it looks as though many are beginning to share that opinion. This is the from the front page of the Telegraph today, which makes that suggestion: 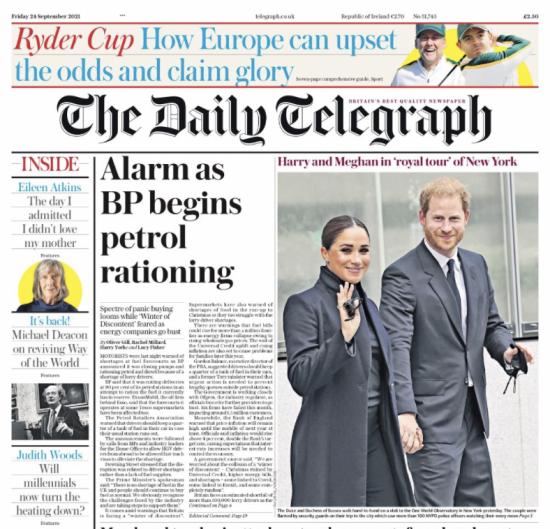 The Guardian has the same theme: 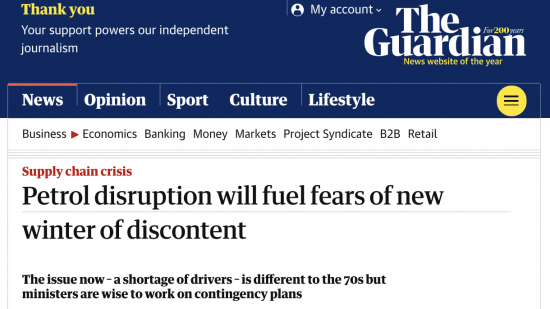 It would seem that petrol and diesel shortages, now being seen at BP and Tesco petrol stations, might be the trigger point. There was always going to be such a trigger; this might be it.

There is no short term resolution to that crisis. The UK government has decided to alienate and even expel a significant part of a labour force on which the country has relied and has, despite warning being given, chosen to do nothing to ameliorate the situation until it is now too late for anything it might do to relieve that labour shortage. So, like it or not, we do not have the drivers that we need, and nothing can now be done about it.

The consequences are becoming increasingly apparent. Tesco has issued stark warnings about Christmas food shortages, which is something it has always studiously avoided doing until now for the precise reason that it wished to discourage panic buying. Now it knows it has no choice but say that these shortages are beyond its control, even though as is the case with petrol, most of the goods it is unable to sell are prevented from reaching its shelves simply as a consequence of deliberately chosen government policy.

And we are all familiar with shortages in many other areas.

If papers think that people might get angry now I think that they are right to do so. I am well aware that people say they knew there would be problems if they voted for Brexit, but that is not the case. Jacob Rees Mogg suggested that shop prices would fall significantly after Brexit, when they are rising. From Farage onwards, it was said there would never be market disruption as a result of leaving the EU. Those who said otherwise were called 'project fear'.

Except, of course, we were not projecting fear. We were project reality. It was always entirely predictable where this situation would end, which is in the chaos now developing. From the moment Theresa May (whose role in all this should never be forgotten) chose a hard Brexit when there was no need to do so this was likely to happen. And now it has. There is no rocket science to it. And nothing else, from Covid to gas supply disruption (much also due to Brexit) can excuse it: this is a wholly self-inflicted wound that the UK government is imposing on the people of this country.

It has to be said that in the history of fuel supply disruption in the UK this situation unique. We have had disruption because of external supply issues and industrial action, but never before by government choice. And if it does happen that this disruption becomes more serious (and it is almost self-fulfilling that it will now as people panic buy) it will be very hard for the government to deny this, or for people to avoid realising it.

What happens then? I genuinely do not know. But if I was in government I would be making some pretty big contingency plans to control a population who might get very angry very soon, although when the fuel shortage will affect everyone, including those who they might call upon to control anger it's very hard to see what they might really do.

Tipping points happen. This might be one. To be honest, I wish it weren't. People are likely to suffer in all this. And that is never my wish. But in that case I have no choice but to blame it on who is responsible. and that, unambiguously, is our government.