I wish I could share the optimism of many I saw out and about - and deliberately choosing to socialise in places with poor ventilation -yesterday as cool descended on a late August bank holiday, but I don’t.

My concern is evidence based. Take this tweet as providing some of that evidence. Dr Deepti Gursdasani is now, with Prof Christina Pagel, one of the best commentators on Covid issues, most especially since Prof Devi Sridhar seems to have become strangely compliant with the government’s line of late: 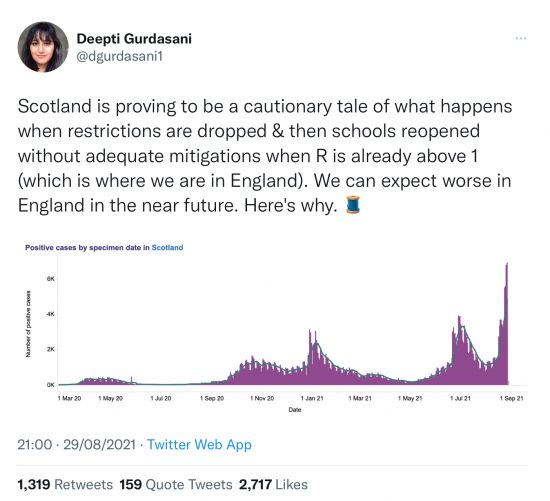 That spike in cases is not by chance: it is undoubtedly related to school reopening. It is almost inevitable that the same trend will be seen in England and Wales very soon.

I am, of course, aware that the connection between cases and hospitalisations has changed, and that double vaccination is clearly helping many avoid serious illness. I don’t need to be told that. But case rates and hospitalisations are rising across all age ranges in Scotland now. And we face a case load 26 times heavier this end of August to that which we had a year ago. The result is that we do face the risk of NHS chaos this autumn, and the chance that we will avoid lockdowns again seems to be low to me.

In that case economic recovery looks very unlikely. The optimistic forecasts from the likes of the Bank of England  from earlier this year look to be very far removed from reality now.

The real question is, in the midst of all this evidence that not much has really changed, what will the government do? Is furlough really going to end? Is austerity likely? And is Sunak’s threat to de-fund the NHS really going to happen? All of these look like acts of recklessness right now. But that seems to be the Tory way at present. And that makes this not just a worrying, but also a dangerous time.