The SNP – Greens Deal: is the devil in the exceptions?

As The National tweeted yesterday, referring to my column in their paper: 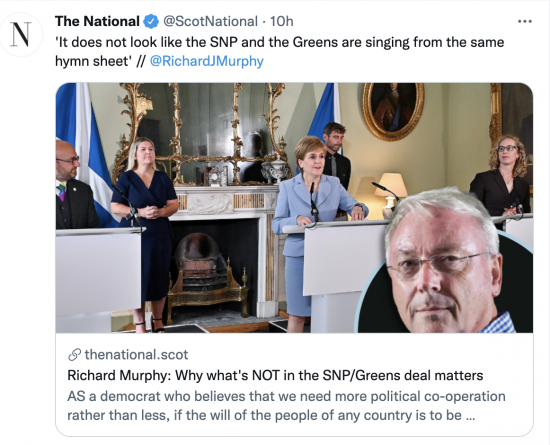 It was long ago that I learned to look at what was not in deals, and what the stated exceptions were to really get a feel for what the whole thing might be about. In my column I concentrates on the exception clauses that the SNP and Greens in Scotland (who, I stress, are not the same party as the Greens in England and Wales) have agreed. I noted two things.

The first is that the two parties have agreed to disagree on the criteria for economic success. For the SNP this is inclusive growth - which I always fear has a feeling of trickle-down within it, although I am sure supporters would not agree - and sustainable growth, which is something very different.

Second, they have disagreed on how to measure success. The SNP want to use GDP and the Greens do not.

I admit I am on the Green side of this argument. I agree with Robert Kennedy who said before he was assassinated during his bid to become US President in 1968 that GDP:

does not allow for the health of our children, the quality of their education or the joy of their play. It does not include the beauty of our poetry or the strength of our marriages, the intelligence of our public debate or the integrity of our public officials. It measures neither our wit nor our courage, neither our wisdom nor our learning, neither our compassion nor our devotion to our country, it measures everything in short, except that which makes life worthwhile. And it can tell us everything about America except why we are proud that we are Americans.

As I noted in The National:

If you substituted Scotland for America in the last sentence you’d know exactly why the Greens are right to reject GDP as a useful measure. The hopes, aspirations and quality of life of a nation can never be captured by GDP.

Sustainable growth can capture those aspirations. But inclusive growth? I doubt it.

No wonder this is not a coalition. I just hope that the Greens can stick to their positions if in office.