How long for Boris Johnson?

I have been intrigued, and also amused, by the reaction to Boris Johnson over the weekend.

Take this from Beth Rigby of Sky News yesterday:

A year ago you said there'd be a border him the Irish Sea - and I quote you "over my dead body" - and here we both are, there is a border in the Irish Sea. Were you lying when you said no border or did you not understand the treaty you signed over Brexit? https://t.co/5W1KjDIVWy

The video is worth watching: she did not hold back, basically telling him he was a liar on the Northern Ireland protocol.

Gary Gibbon did the same on Channel 4. I don't think Peston was much kinder: he has definitely turned.

This morning the Guardian says: 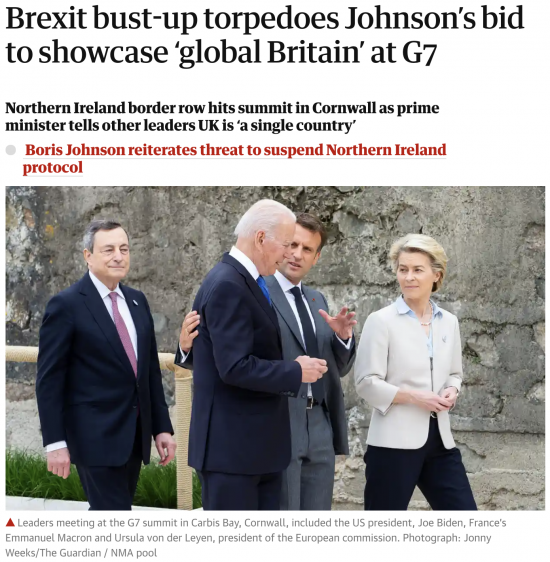 The issue is simple, but worth highlighting in stages.

The UK now seeks to deny this, saying Northern Ireland must be in the UK single market. That is impossible under the terms of the deal it signed with the EU.

The EU say the deal was written in English to make sure we understood it. We must honour it as it was written. The demand is entirely reasonable.

Johnson uses the threat of loyalist paramilitaries to seek to threaten the EU and peace in Northern Ireland to support his claim to ignore this.

The US has issued the sharpest possible rebuke to the UK.

Johnson says it’s time the EU agreed the UK demand. But the UK has no demand it can make: it has already agreed the issue. There is no ambiguity. There is a border in the Irish Sea. We agreed it. The reality, as the EU points out, is that we are refusing to do what we agreed, which is to police it.

Johnson is trying to claim the EU is being inflexible. But that’s as absurd as claiming that a contract for the sale of a car can be fulfilled if a cow, which the other party never asked for and does not want, is supplied instead.

Nor is Article 16 to the Protocal of use. That says it can be suspended in an emergency if that proves to be necessary. But you can’t claim a suspension for something that has not yet started, which this arrangement has not. Johnson is on very dodgy ground there.

All Johnson actually proves is that he is not a person of his word.  It’s hardly a surprise. He never has been. He never will be. He has always presumed rules are for others and are waived for him. But that is not how this deal can work. It is not what will happen.

What is the outcome? I think it will be ugly. And I greatly fear people will die in Northern Ireland as a result. The UK’s status in the world, already harmed, will suffer greatly. And all for Brexit which is still a project in pursuit of a goal, unless it is racism.

Add to this very obvious crisis to come the end of the Covid bounce as lockdowns continue and there is an obvious question to ask, which is how long can Johnson last?

But then the question is who comes next? And there is no good Conservative answer to that.

We really are in a deep, and very dangerous, mess.