So you thought it was all over? Government borrowing says otherwise

This is from data published by the Office for National Statistics this morning on public sector borrowing in April 2021: 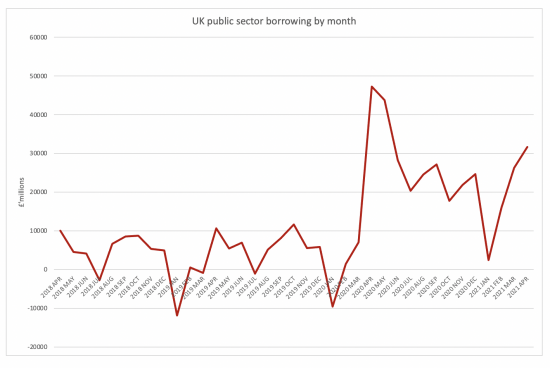 Borrowing in April was £32 billion. A year ago it was £47 billion, so I suppose you could call that progress. A year before it was £11 billion, to provide a benchmark.

It's dangerous to extrapolate a month, but this is not a good sign. And that's because of that markedly upward tick since January. This year the borrowing has been as follows:

Each sum is in millions. That is a very strong upward progression. It is true that April is traditionally the heaviest borrowing month of a year (could it just be that government hangs on to make the figures for the previous financial year look better?). But the pattern for February and March, where low figures are normal against the prevailing norm, are not a good sign.

Four thoughts. First, this suggests a borrowing target for the current year of only £120bn or so as per the latest forecasts looks wildly optimistic.

Second, although there is a great deal of money in the economy this suggests that the government is still keeping that process going. Deficit funding remains the norm, and all the concerns that gives rise to on growing inequality remain relevant. I am not saying stop the spending: that would be foolish. What I am saying is that measures to tackle the inequality have to go hand in hand. We need more taxation on wealth now.

Third, I cannot see how deficits of this order are going to be funded without more QE. The existing £895 billion Bank of England programme is not exhausted as yet. But I will still be expecting more.

And fourth? We are not out of the woods as yet, not by a long way. The claims that the private sector economy is bouncing back look a bit hollow based on this.