This notice was published via the Stock Exchange yesterday: 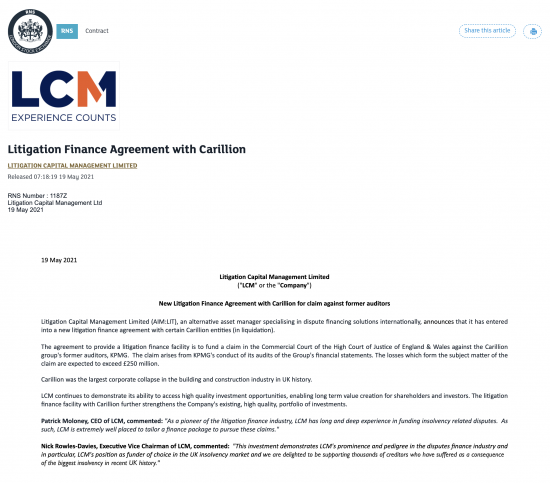 The summary of that is that a company is to provide backing for a legal claim against KPMG in their role as auditors of Carillion, the outsourcing and contracting company that failed in 2018 owing maybe £7 billion, and with maybe 70,000 direct and indirect jobs lost.

The essence of the claim is that if the auditors had not kept signing off the accounts as true and fair then the directors would not have continued with their policies. As a result the claim appears to be that the auditors bear the blame for the company’s failure and as such should pay compensation.

I am no lover of the Big 4 (and I should declare an interest: 40 years ago I worked for what became KPMG). Nor am I a fan of accounting abuse, which is far too prevalent, but I think a word of caution appropriate here.

Carillion was what my academic colleagues and I call a hollowed out firm. Two things happen in hollowed out firms. First, there is over -dependence on borrowing. Second, that borrowing is used to fund excessive dividend payments in proportion to profits earned.

New research we are doing that will be published soon shows just how commonplace this ‘hollowing out’ by over distribution is. We think at least 28% of quoted companies might have paid out more in dividends over the past decade than they have earned in profits, with the dividends being funded by borrowing.

This is  possible because under U.K. accounting rules dividends are not determined by the profits of a group of companies, but are instead determined by the available profits of a parent company. Structure the group correctly and profits and losses in subsidiaries can both be inflated. The dividends are paid up to the parent company for inward payment to the shareholders. The losses can be ignored by it, because losses cannot be distributed and parent companies do not, by themselves, have consolidated accounts. The result is that it is easy to engineer a higher capacity to pay dividends inside U.K. companies and U.K. accounting rules than are actually capable of being paid based on reported group performance. The loan financiers are taken for a ride. The shareholders are very happy with the short term payments. Bosses get their bonuses and everything is fine until the edifice collapses, which it did in the case of Carillion.

KPMG’s crime is following the rules when the directors of a company were hollowing out their firm, which is common  (and very well rewarded) commercial practice. It is not clear whether they had the right to shout foul, or not. I think they should have used a true and fair over-ride to do so, but good luck arguing that when no one does is what I would say to the litigants here.

The truth is what is wrong in this case is the rules on both accounting and auditing. Will the current government review of auditing really change that? It already says it will leave the fundamental flaw in this case - that the parent company accounts determine the dividend and the group result can be ignored - in place. So my answer is a straightforward ‘no’. It looks likely that the abuse will go on.

Auditing is important. Having accounting rules fit for purpose is even more important. And we’re a long way from that at present, probably because the profession dies not want them. The gravy train of abuse is too profitable, I suspect. But that will not stop me asking for the necessary fundamental reforms that we need.