My column in The National in Scotland published yesterday is one that could have been written just as easily for here.

For copyright reasons you have to read it on their website. In it I argue that:

However well nationalists do - and I sincerely hope they will - the crisis that corruption has brought centre stage into UK politics as a whole is not going to be resolved by the elections. I cannot find a single prediction suggesting that the Tories are going to be punished for the quite astonishing abuses of power that have been the hallmarks of Johnson’s period in government.

The UK faces an existential threat as big now as any seen since 1940. But this time that threat comes from the Government in Westminster. It’s in Scotland’s best interests to be rid of it. It must call on Labour and others to join it in freeing us all from its yoke of corruption. That is the task from Saturday. Peaceful, enduring, unchallengeable independence depends upon it.

My suggestion is simple. We are in crisis. Politicians who oppose corruption have to come together to stop this crisis. Come Saturday this is the biggest crisis that we face. Only a coalition of the good can defeat the evil that the Tories are now creating.

It really does have to happen.

And it looks like people might agree. According to this morning's mail from The National this was the best-read article in it overnight: 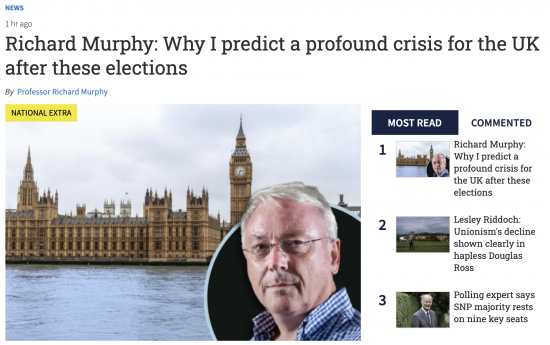