I thought I would have a quick look at the income statements of the six clubs from the UK who have said that they will be joining the European Super League. They are as follows: 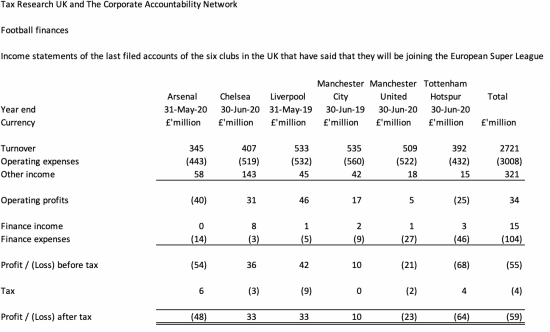 Note that these are the latest accounts I can get in each case: they are not all for the same year or same year-end.

Add them up though and this is a tale of £3,042 million of sales (if the profit on player sales which make up most of the p0ther income are taken into account) matched by almost exactly equal operating costs that are, after finance spending, turned into operating losses. A paltry maximum tax contribution of £4 million arises, mainly due to Liverpool.

So what's the story behind this?

Second, in some cases debt casts a heavy burden over them. That's especially true at Manchester United and Spurs.

Third, none of these clubs looks to be in a good financial position. The trend is for tiny profit margins on revenue and heavy gearing - meaning most are very vulnerable to debt repayment.

So, what's the real motive for the European Super League? A way to manage the excessive costs of these clubs, and to sustain sufficient income to give a chance of paying their debts, I would suggest.

But given that the rest of the League also faces such struggles, for these clubs to try to achieve that at cost to the rest - which is what they are doing - is deeply counterproductive. Damage the competition in the UK, or undermine the market for the players that they have to sell, and these Super League clubs could in fact be putting themselves in a perilous financial position simply by making the changes to the structure of football that they are proposing.

Some serious debt right off by their owners, for a start.

And some serious pay cuts for players, next.

Then there is a requirement to ensure that they can live within their means - and not require ongoing finance to cover losses as a part of their business model.

After that? A review to make sure that they make bigger returns to their communities via tax paid.

And then a review of their long term financial stability to see how those futures can be assured because if anything what these negotiations reveal is that none of these owners thinks that they are.

I'd summarise by saying I read the move as being that of a much of very frightened people trying to find some value in assets which as they stand look to have pretty marginal worth.