If you ask the wrong questions about the national debt without first trying to understand what it is you do, of course, get the wrong answers

I watched Channel 4’s Dispatches on who pays for Covid last night, largely in despair.

Partly that was at the choice of the hard-right economics commentator Liam Halligan as the presenter. I had the misfortune to share a platform with him once. Mainly, though, it was with the message.

That message was, correctly, that we cannot have tax increases now. We cannot. The evidence provided and the logic given was scant though.

The obsession was, instead, with increased debt. Alistair Darling was rolled out to say that even if QE was used ‘we will have to pay for this one day’. But how, and why, was not addressed.

So let me provide some data that I have been preparing for a talk I am giving on this issue on Thursday evening (which is open to attend). Amongst the data I will use are these two charts. The first shows UK reported debt and QE, and the net sum of the two: 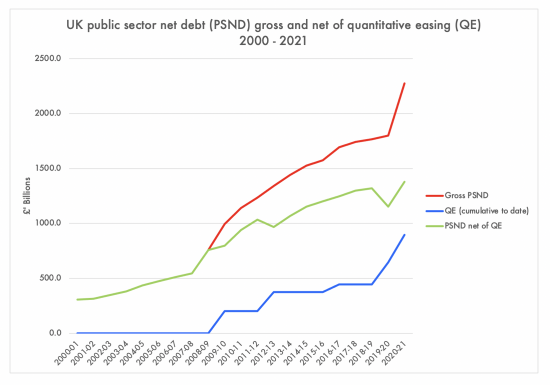 The second restates this data as a percentage of GDP: 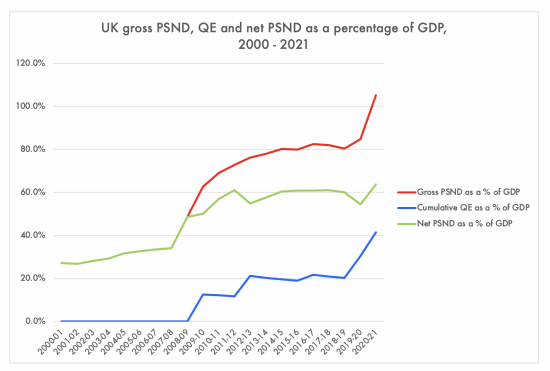 It is the green line in the second chart that matters. What is clear is that since 2011 debt has been stable. The latest slightest upturn is only because GDP fell. Put quite simply, QE has taken the strain.

That does not mean all is right in the world. QE has massively increased wealth inequality in the UK. That is why action is needed to tackle that, but the point is debt is not out of control.

Unless, that is, you do two wrong things. One of those wrong things is to treat gilts owned by the government as debt, which very clearly they are not. If a person owes themselves a debt, and the interest charge on that debt is effectively cancelled, and they have never once taken a step to reverse the ownership of that debt, all of which conditions hold true in the UK with regard to gilts repurchased by the government using QE and show no signs of ever being reversed, then clearly the accounting substance of the matter is that the debt in question is cancelled. So, the green line in both charts holds true.

And the second error is to presume that the money created by the Bank of England to buy these debts is itself debt. It isn't. There are two reasons for saying so. The first is that banknotes are not in the national debt - and I will publish my explanation of this soon - and that since notes and the central bank reserve accounts which represent the new money created by the Bank of England for quantitative easing are both described by it as 'base money' - then that QE created money cannot also be included in the national debt. This is why the ONS keeps the gilts in its calculation instead, to suit the government's political agenda, whilst wilfully misstating the debt as a result.

So, there is no debt to obsess about. There is only the money that has already been used to pay for Covid. And try as I might I can't think why we want to pay for Covid twice, or come to that, why we would want to cancel the money that the banking system seems to require to maintain solvency right now (or more would not have been required in March 2020).

So, Liam Haligam asked the wrong question, based on a lack of knowledge and came up as a consequence with an obsession with inflation of which there appears to be very small risk.

I will be asking the right question on Thursday night.