Roaring 20s? Not likely, I suggest

Andy Haldane at the Bank of England is saying that savings made in the last year could all flood into the market in 2021 and start a 'roaring 20s' boom.

I gather the Resolution Foundation (cut from similar cloth to Haldane) think much the same.

I beg to differ. First, some history: 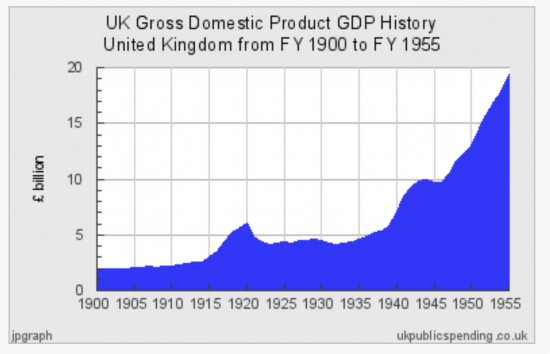 Pent up demand in 1919 did not lead to sustained growth. The 20s did not roar in the UK. Not did the late 40s, although of course, rationing did not help then.

Nor is this likely. As I noted recently:

For me the most important chart in any economic forecast is that on the sectoral balances. This says who is going to save, and who is going to run a deficit. And there are only four sectors - the government, business, households and the overseas sector. The chart reflects an accounting identity - the data has to balance (as is true in reality) but where it balances is a critical indicator of the truth or otherwise of any forecast - and indicates whether it is plausible or not.

This is the OBR forecast, just published: 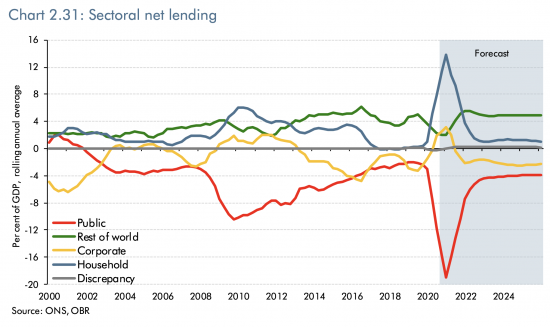 As I noted earlier today, the government deficit is matched by a massive rise in household saving this year. But it is assumed that by the end of 2022 households will hardly be saving at all.

How likely is that? Look at household behaviour after 2009 as an indication: savings remained high, and much higher than is now being forecast for 2022 onwards, until 2016. Given all the uncertainties that now exist, I suspect a 4% ratio likely, at least, for a long time to come. That is much higher than forecast, and means spending in the economy will be much lower than the OBR predicts.

Look too at the foreign sector. Will its savings in the UK grow after Brexit, as the government assumes? Why would that happen? And again, note they fell for four years after 2008 - so there is no reason for thinking that anything will be different now. I think a percentage or two could be knocked off that.

And look too at the corporate sector - where it is forecast that the sector will invest on a more consistent and at a higher level than it has for some time from 2021. But look at 2009 to 2013 and it saved during that period. As it will also do now.

In other words, all these forecasts look to be wildly overstated. And that means there must be a counterbalancing entry, and that is in the government deficit. That will not be 4% from 2022 on (which is about £90 billion a year). I think it could be 4% or more higher than that. I suspect a deficit of £200 billion a year much more likely.

I see no reason to change my mind. Certainly, some foolhardy people risked coronavirus at the weekend - and will no doubt do so over Christmas. But for the majority, the animal spirits are muted. And the savings that Haldane and the Resolution Foundation note exist are horribly imbalanced towards those with wealth - who tend to accumulate and not spend. That's why they are wealthy.

So do I see a rush back to normal amongst a wary population who see only unemployment and economic crises on the horizon in 2021? No, I don't. I see anything but that for most people, and those who will spend will not do enough to address the issues we face, even if they can get hold of the goods they want, many of which will be stuck in a container, somewhere.

The chance of a roaring start to the twenties looks remote to me.