The national debt: an ongoing saga

I also raised concern at that time about what actually constituted the national debt, noting just how hard it was to find this information within the data published by the ONS, before coming up with this presentation: 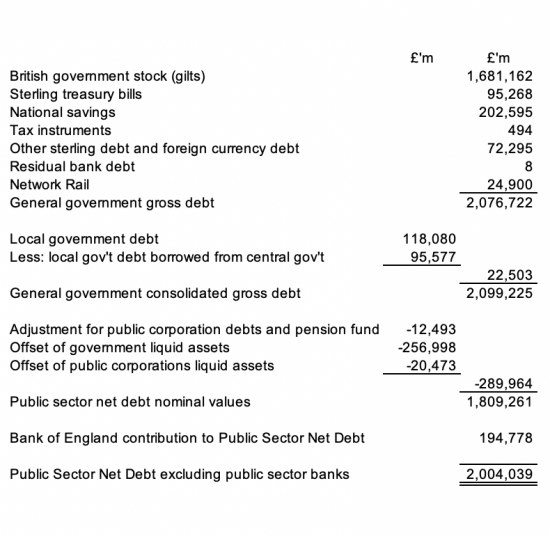 There are a number of things to note. The first is that, slightly amusingly, the latest ONS data, released for September, downgrades the July debt estimate to £1,997bn. So, it wasn’t £2 trillion after all.

More importantly, I have pursued, as I said I would, the issues arising. I should record my thanks to the ONS, HM Treasury and the Office for Budget Responsibility, all of whom have actively engaged in discussion on this issue now, and to the Bank of England, which has corresponded, at length.

I would like to say I have an answer to the issues I have raised, but as yet I admit that I have not. This discussion is ongoing, including on matters as basic as what is, and is not, included in the calculation, which discussion covers some quite surprising issues.

Issues around how I think the national debt should also be presented have been subject to a lot of research, and report drafting, followed by much redrafting as evidence has accumulated. The issues arising, and the economic, accounting and political economy issues involved are remarkably complex. Colleagues at Sheffield University and elsewhere have already provided invaluable support in these discussions.

What began as a simple blog post has turned into a major project, in which all the UK’s major public sector economic reporting agencies have now played a part. There will, I promise, be results in due course: I am now working on a paper, although don’t expect brevity or a light read, as those who have commented to date have complained. I do, however, think that the work, and the wait, will be worthwhile. The one thing I think I can safely predict is that the national debt is definitely not what it claims to be.