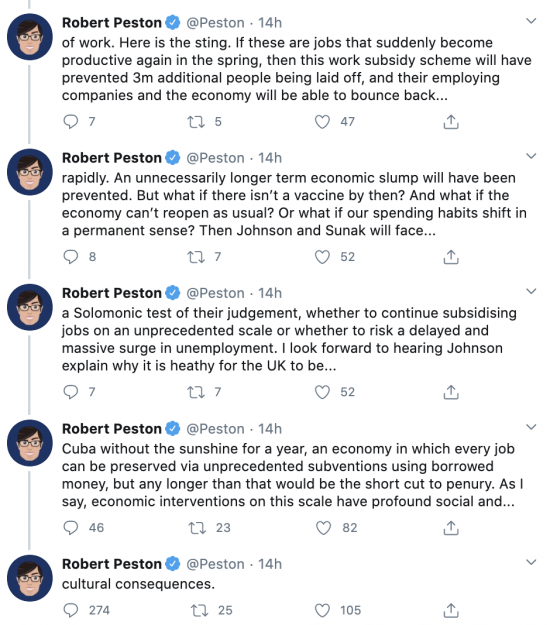 Peston is meant to be a political commentator.

One has to presume that he has some intelligence.

And yet he thinks that ideology can be deduced from actions. And that because Johnson and Sunak have been dragged, kicking and screaming, and with a reluctance that is all too readily apparent, to support the people of this country in a way that will, to a degree (and a patchy degree at that) from some of the worst economic consequences of coronavirus they are now socialist.

No, they are not.

These are blue in tooth and claw arch-neoliberals who are hating every penny that they spend and who cannot wait for the day when they can, or at least will try to, shrink the state again.

All they're doing now is using the undoubted power of the state - which with every breath they try to dent exists - to buy off an electorate who would otherwise riot, and who might do so anyone, so people and so unfair is the distribution of that buy off.

Of course the buy off sets precedents. Never again can it be said that the state cannot act. Never again can the claim that there is no magic money tree be sustained. Never again will the decision not to feed children be seen as anything but callous politics.

But to suggest that this means these people are socialist has to be one of the most stupid of all the many stupid comments made during this crisis.

And despite not knowing this Peston is employed as a political commentator.