We are already in chaos, and it’s just going to get worse

Three articles that I noted in this morning's papers suggest the scale of the economic crisis that we are facing.

One, in the Financial Times, suggests that the port of Felixstowe is already chaotic, with containers taking many days to now leave the port. Apparently, things have got much worse during the coronavirus crisis. It has been suggested that too many staff were furloughed. Whatever the reason, Felixstowe is clearly in no position to pick up any problems from cross-channel trade routes, and apparently Southampton is already working at 95% of capacity. Calls have apparently been made for government intervention. Right now I am not sure that would be wise.

A second is in the Guardian and refers to shop closures. As it notes:

A record number of shops disappeared from high streets across the country in the first half of 2020 as the Covid-19 lockdowns hammered the retail sector.

The accompanying graphic is pretty stark: 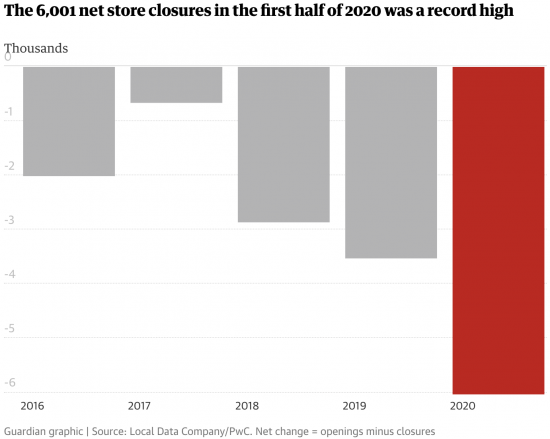 The downturn is real, in other words. I feel sorry for all those impacted. I did so when walking past an Edinburgh Woolen Mills shop, which admittedly I have never been into, at the weekend, and noting its closing down sale sign.

The third is, if anything, the most significant. Again in the Guardian, it refers to supply chain issues for public sector food supplies, like those for schools and hospitals. It makes this point:

The supply of food to care homes, schools, hospitals and prisons is at risk unless the government steps in to support struggling wholesalers, the UK chancellor, Rishi Sunak, has been warned.

Trade bodies representing major food companies said the loss of business from the hospitality sector, which has been rocked by the 10pm curfew and limits on household mixing, meant that firms which also serve the public sector could fail.

Here we are back to my perennial theme since March, which is that it is cash flow that will kill businesses. If there is not enough business flowing through them and they have not got the capital to adapt they will fail. And that is the risk being seen here, that I very strongly suspect that few in government understand because most have been taught be economists who make the assumption that neoclassical economics usually makes, which is that businesses react instantly to new information, when the reality is that they cannot do anything of the sort.

All three messages are that we are in trouble. The last may be the most serious of the three though because it is the one that this government just cannot understand. A career trading in the City is not the same as a career in real business and teaches them none of the things that they need to know about how business really works. The danger is that I very much doubt that they know that.