This thread from Nicholas Watt, just published on Twitter, is fascinating: 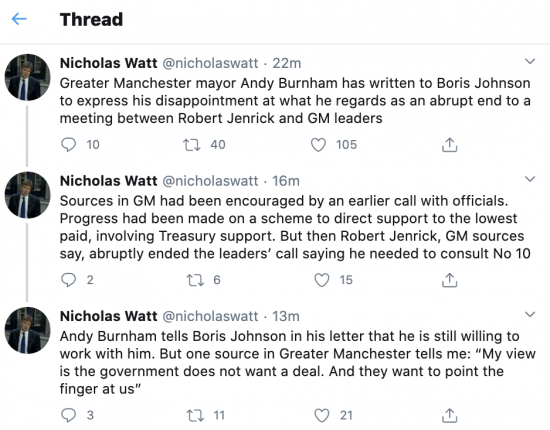 Let me do a little speculating.

I suspect that the Manchester team entered into negotiations with the government in good faith. It is very clearly in their best interests to get a solution to this problem, and an outcome for the population of Manchester that both tackles Covi-19 and provides support for those who cannot work. That would be a wholly reasonable objective.

Then let's presume that the government did not want that result because that would look like a success for a Labour mayor. So, when it looked as if the talks were progressing well then (as a number of sources seem to confirm) the government suddenly pulled out of the talks, which then seemed to collapse.

Why would the government do that? The only obvious explanation is that they do not want a solution other than their own chosen, chaotic, outcome.

Then note that the government is also, of course, still in negotiation with the EU, whatever they wish to say otherwise. Just as Manchester is, I think, negotiating in good faith, I very strongly suspect that the EU is as well. After all, they have every reason to wish to avoid economic chaos in the UK: they will undoubtedly lose as a result of it. They might have red lines they are not willing to cross, which were always entirely predictable when seeking that agreement, but I am also quite sure that those red lines gave them ample wriggle room to create a perfectly acceptable deal. Indeed, I rather strongly suspect that such a deal has been put on the table.

What has been the UK government's response to that perfectly acceptable deal? They walked away, having created an entirely artificial deadline, without consultation. What was their aim? It was to prevent a deal that would, effectively, have been written by the EU for which Johnson could be blamed, and for which he could claim no credit. So, instead, he would rather have no deal and blame the EU, Just as he would rather have no deal with Manchester and blame Andy Burnham.

Am I the only person seeing a pattern in this? I very much doubt it. But, I still think it worth noting because what it very clearly says is that we have a government that does not act in good faith, pretty much as I suggested in a blog post yesterday. I would describe this as a form of corruption.

How did we reach such a low point in our history? I also answered that question yesterday. We now need fundamental reforms to survive this.