A speech by Andy Haldane, the chief economist of the Bank of England, was published this morning.

I have to admit that I have not understood Haldane's views throughout this current economic crisis, and this speech leaves me as confused as ever I was. But then, at least he has the decency to admit that he too is confused, although the blames what he clearly thinks to be the irrational behaviour of the public for his confusion.

One of the things that he is confused about is implicit within this chart: 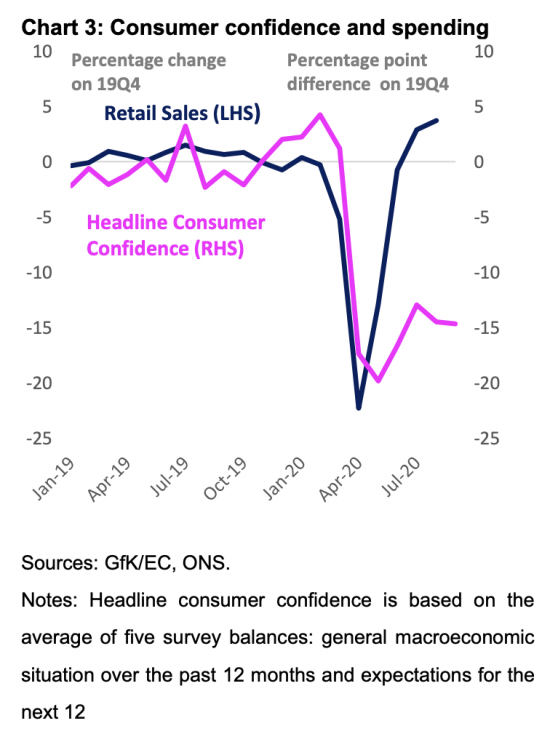 As he puts it:

The failure of consumer confidence to recover is particularly striking, given the complete recovery in consumption by households over the same period. Put differently, the historical correlation between consumer confidence and spending appears to have broken down (Chart 3). A wedge has emerged between peoples’ expectations and their spending, between their risk perceptions and economic reality. The same is true, to a somewhat lesser extent, among businesses.

His explanation is that Chinese whispers amongst the population at large are exaggerating the systemic risk that we face a present when things are actually going quite well. As evidence of things going well he offers increasing share prices and Riosh Sunak's new job retention scheme. As far as I can see, however, share prices are continuing a downward trend: 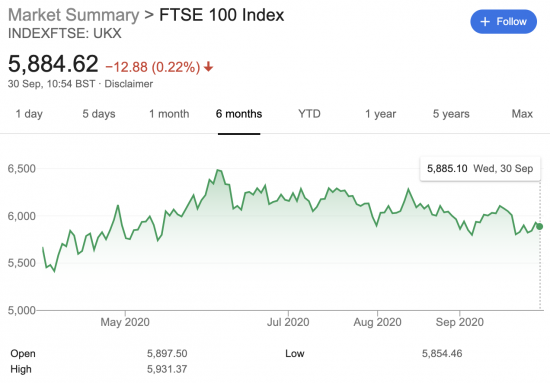 And, as I have already made clear in comments, which it is clear that many people agree with, Sunak's scheme has a perverse incentive to sack people built into it. If Haldane can take courage from bad news, and thinks others should, he clearly has a problem reading the runes.

What is more, as ever, Haldane appears unable to see beyond the immediate future. As I have suggested many times, this crisis will evolve as the cash flow pressures implicit within it begin to hit employers, particularly with regard to the demand that they settle back taxes, pay rent arrears and begin repayment of new loans.

I would, then, suggest two things to Andy Haldane. The first is that his chart 3 simply reveals that pent-up demand was released when lockdown ended, but that did not change long-term consumer expectation, which remained deeply negative. The second is that consumers have got this right: they can see that if there are at least 3 million people still on the furlough scheme now and that scheme comes to an end in October, with the replacement scheme encouraging employers to make people redundant, then the chance that unemployment will skyrocket is extremely high, and in that case, of course, they remain exceptionally wary. All the baffles me is that Haldane cannot see that. I suggest his ability to forecast almost anything has gone absent during this crisis.