How realistic is the Office for Budget Responsibility forecast for the UK economy?

The Office for Budget Responsibility has delivered its forecast for the UK economy. In summary it tests three scenarios: 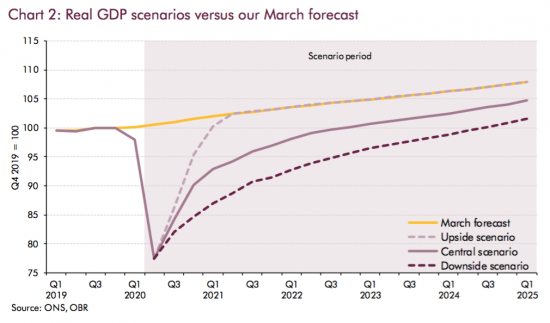 The optimistic scenario says we bounce straight back to where we were. This is what might be called the Bank of England view.

The central scenario is a midpoint, and they also offer a downside view.

How realistic are these? Look at the unemployment forecasts: 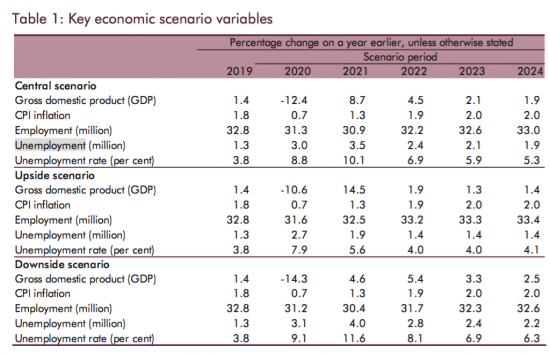 In the best case, unemployment does not go above the current increase in the universal credit claimant count that has now reached around 3 million people. That's ridiculously optimistic. Why the OIBR modeled it is hard to imagine, unless they wanted to make the Bao of England look silly. Don't rule it out.

In the central case - their main forecast - they suggest unemployment will reach 3.5 million. That's only half a million above the current UC claimant count and assumes all 2.5 plus million self-employed people have their businesses survive coronavirus and less than 25% of furloughed people lose their jobs. I know no one who thinks that likely.

In the worst-case unemployment is just a little worse, but not much.

In contrast, I think 6 million unemployed is much more likely, made up of one in three furloughed people plus 2 million self-employed people whose businesse3s will have failed plus existing unemployed people. I think that easily the most likely 2021 forecast. So I would suggest that the OBR unemployment forecast is wildly wrong.

They also fail to consider the risk of a second wave of coronavirus, and the likelihood of that is high, and plenty high enough for eminent scientists to warn of it. To not model that scenario appears negligent as a consequence.

In that case it is fair to conclude that the OBR forecasts already have little credibility.  But then let's look at their detailed government income and spending forecasts. This is income: 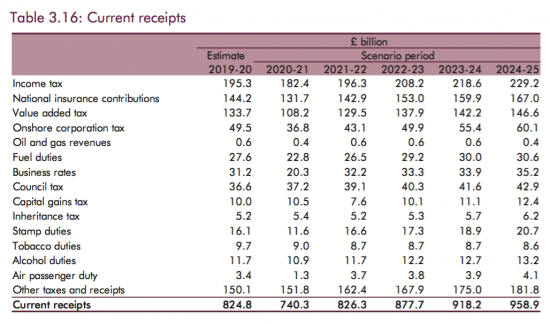 And this is the variance from the previous forecast in income: 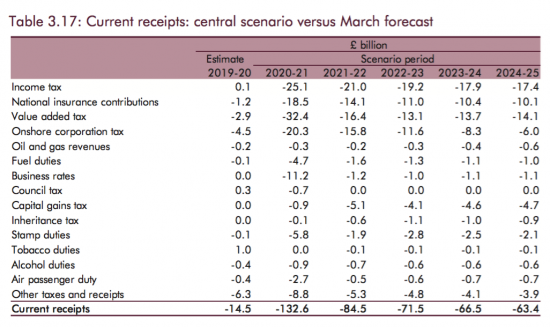 Whilst this is spending: 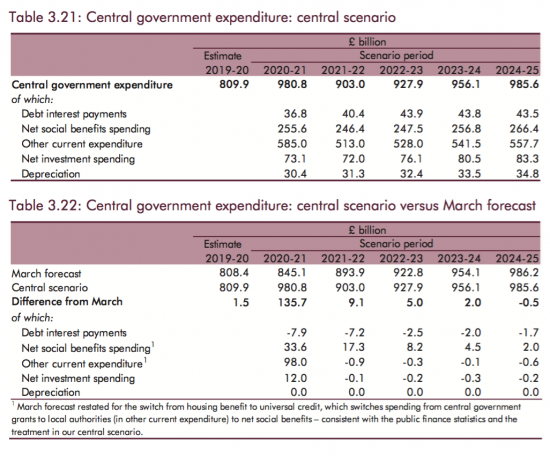 What do these tables show? I suggest several things.

The first is that the unemployment forecasts do not suggest how bad the OBR thinks things will get: revenues are down more than unemployment would imply to be appropriate, meaning that that the OBR think that it is not just employment that will be down, but also the income of those employed.

Second, the Treasury thinks national insurance will recover quicker than income tax: are they implying that income from wealth is going to fall more than income from employment? It is not clear.

Third, corporation tax is hit proportionately the most: this is why the idea that businesses will invest more, implicit in the forecast and a key basis for recovery, is wrong.

Fourth, overall the loss of tax revenues contributes at least half of coming deficits. You can see why the OBR say £60 billion of tax rises are required to put this right: that's what their model says. They ignore the fact that every penny of tax rises will make the deficit worse when we are at less than full employment.

Then, fifth, turn to spends. Here the forecast is quite staggering. There is a saving in interest costs despite increasing deficits, as I have already noted. But then look at the rest. There are paltry increases in social security costs for millions more unemployed - meaning that their destitution is planned. In 2021 the forecast 2.2 million extra unemployed get £17.1 billion between them - if all benefit increases were to go them, which will not be true. That's £7,860 each. Imagine how that is going to work, if you will.

And, sixth, note that is the limit of additional spending. Nothing else changes.

Now, of course there is more to the forecast than these points: this is just a review. But the central issue is this one, which is that if the unemployment forecast is wrong and the spending forecasts look very wrong then what hope is there that this forecast has any credibility at all? I would suggest that there is very little.

My suggestion is that matters are going to be much worse than this forecast suggests likely. The Office for Budget Responsibility is notorious for being over-optimistic - its forecasts have almost invariably been so (I think without exception). On this occasion I think it wildly over-optimistic. And that helps no one at all.

The scale of the crisis we are facing is much bigger than the OBR, which is an agency of government after all, whatever is claimed for its independence, is willing to admit. And what we really need are plausible forecasts to see a way through this. I suspect that the crisis will have to really emerge before we get them. But that does not help anyone.