The debt fetishists are back in town, asking all the wrong questions, but with massively dangerous consequences

Chris Giles at the FT had a good coronavirus crisis: his work on estimating real deaths was widely noted. But now he's back in familiar territory as a deficit fetishist under the headline:

As his article says:

Chancellor Rishi Sunak cemented his status as the government’s Santa Claus on Wednesday, lavishing more gifts to help companies and households deal with the coronavirus crisis.

But while Mr Sunak hailed his “plan for jobs”, the bean-counters at the Treasury were totting up the cost to taxpayers. The chancellor’s decisions in his summer statement, alongside plunging tax revenues, are likely to push the budget deficit up to £361.5bn, according to Financial Times calculations.

The usual range of good FT graphics are there to help. Start with this: 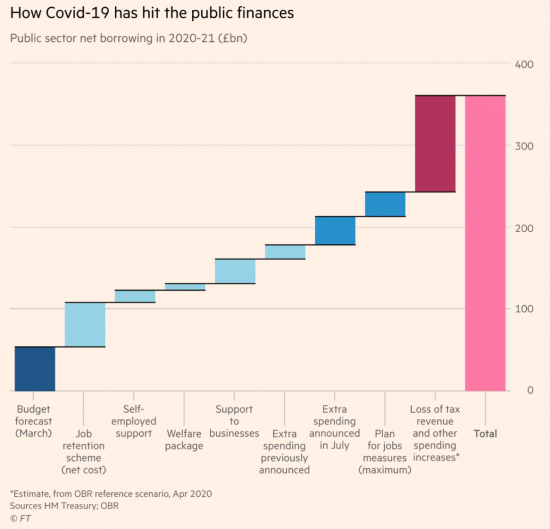 Which is a useful way of noting that so far nothing has been spent on rebuilding: everything is simply reaction to date. 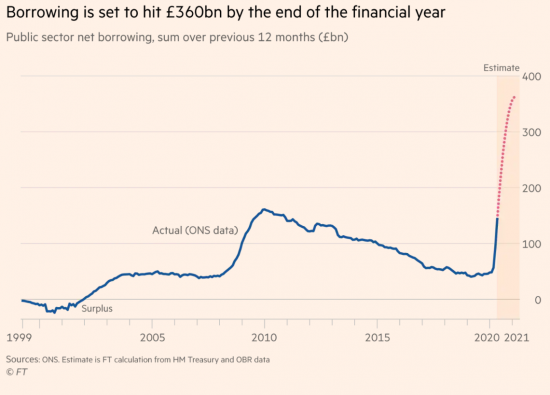 And say 'so what?' followed by 'I bet it will be more than that before the year is out - because we ain't seen nothing yet'.

And then there is this: 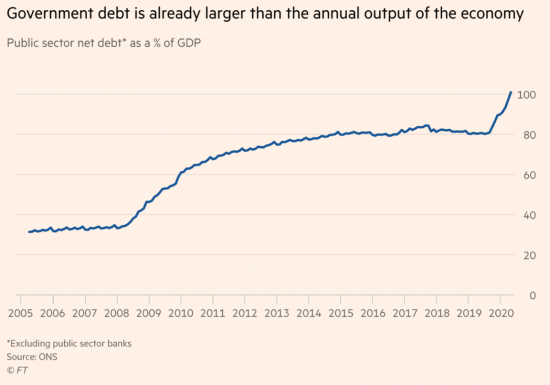 This, of course, is a blatant falsehood since it ignores quantitative easing. If UK government 'borrowing' this year will be £361 billion, as the FT estimates, and quantitative easing will, we know, be at least £300bn then the real 'debt' has only risen by £61 billion at most, and not by £361bn the FT represents because the government simply owes itself the rest, which is meaningless. As a result national 'debt' is actually only about 65% of GDP.

But there is a more important question. And that is what is all this about? Giles says:

[T]he BoE bond-buying will not continue for ever, and Mr Sunak said he wanted to begin to “put [the] public finances back on a sustainable footing” in the autumn Budget.

Two questions: the first, is why can't it continue when it has in Japan for three decades and they still have not a clue how to create inflation there despite notional debt of well over 200% of GDP? And second, what is a sustainable footing? Surely, that's affordability, and we're borrowing at zero per cent right now. Issue it as perpetual debt at the same time, and the question literally goes away. So what does this paragraph by Giles mean?

And then there was this:

The chancellor will hope that the bulk of the deficit reduction will come from the economy beginning to fire on all cylinders again, but he is aware that he is likely to have to supplement this in the future through tax rises or spending cuts.

But Giles knows, as well as I do, that the economy is not going to fire on all cylinders again, and that even if it did that's the old and wholly unsustainable economy that needs £1 trillion spent on it via a Green New Deal to make it fit for the purpose of our survival as a planet. So this paragraph is meaningless. It isn't going to happen.

So what does Giles (and his fellow deficit fetishists) want? Is it people dying in the streets from hunger? Millions thrown out of their homes that they can no longer afford? A crushed NHS? A reduction in pensions? Children denied an education? An end to child protection? Which of these is that they will go for to create a 'sustainable footing' for the public finances?

And why do they want tax rises when they know these drain demand, and so jobs from the economy, simply increasing the economic crisis that we face?

Unless Giles says what he wants to do - and faces the real human cost of it - and says he can live with the destruction that it will create, all because he refuses to accept that a few taps into a computer at the Bank of England can continue to be made to deliver all the money that we need to prevent these catastrophes happening without any risk of inflation arising - then articles like this are meaningless.

But they're not without consequence. Because until he changes his tune Giles and the deficit fetishists are asking for people to literally die in the streets, having been throwing out of their homes because the government will have declared it can no longer afford them, or their healthcare, education or their protection. And these people need to be reminded of that.