The Fair Tax Mark has just issued this press release:

The public are using lockdown to take decisive action against tax avoidance practices, as record numbers of Brits would rather shop with (79%)1 or work for (82%)2 a business that can prove it’s paying its fair share of tax.

The figures are a three-year-high from the Fair Tax Mark’s annual polling, with year-on-year increases in those calling for not just greater transparency from businesses but more action from local authorities and the Government.

This year’s polling, which took place during lockdown amidst a renewed sense of community cohesion and support for stretched public services, produced new statistical highs including:

In a first for this year’s polling, new insights were generated around businesses currently receiving Government support, as eight in ten people (82%) questioned believe businesses benefiting from bailouts should be forced to agree terms that prohibit tax avoidance and enforce responsible tax conduct.

Paul Monaghan, Chief Executive of the Fair Tax Mark, said: “For many, lockdown has provided an opportunity to reflect more on societal values - whether its supporting our vulnerable, shopping locally or gaining a greater understanding of how employers act at a time of crisis.

“With  £7bn of annual revenues still not being collected as a result of corporate profit shifting to low tax jurisdictions plus an estimated £300BN coronavirus economic cost, the public want businesses to prove that we’re in this together.”

“The vast majority of people want to support and celebrate the businesses that reject the use of tax havens and tax avoidance, and they want their politicians to force the laggards to come clean. Too often it is impossible to discern whether a company is paying the tax it should, even with a forensic analysis of their accounts.”

“That’s why during the coronavirus crisis we have been calling on the UK Government to ensure that any bailouts are conditional on recipients committing to responsible tax conduct and transparency.”

Most recent polling conducted via ICM between 15 and 17 May 2020, with a nationally representative omnibus survey of c.2,000 adults across GB 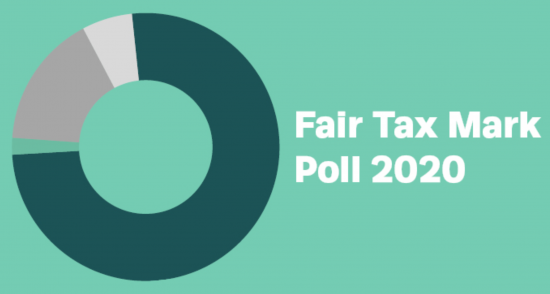