Are climate NGOs really going to let another crisis go to waste?

A group called The Climate Coalition (about whose work, funding and staff it is remarkably quiet on its own website, I have to say with some concern) have got 57 organisations to sign up to its action plan for climate recovery, issued this morning.

The list includes some well-known names. They've agreed to this: 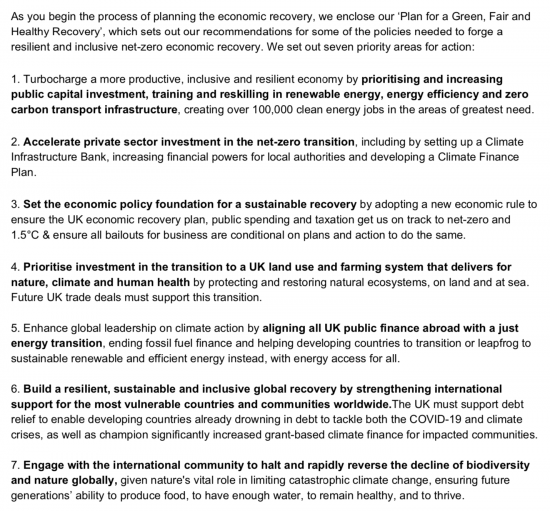 There is, of course, nothing to object to in this list, and maybe that's all you can expect when you get 57 varieties of organisation to sign up.

That the demands made for the UK economy are uncontentious is reflected in the fact that the CBI has issued a press release since the release of UK unemployment data this morning, most of which says (and apologies for not having a link; this was emailed to me):

“Unemployment falls unevenly across society and leaves scars that last generations. The urgent priority must be creating inclusive jobs today, by turbo charging the sustainable industries of tomorrow. This should be backed by a revolution in retraining, with business, government and education providers stepping up to reskill communities for the future.”

I think it’s fair to say that there is, then, a consensus about this being the way to deliver a recovery. That said though, the lack of ambition in this plan is very worrying.

Note that they are only looking to create 100,000 jobs. Even todays completely understated unemployment data  suggests that 600,000 jobs have already been lost in the UK. In the circumstances these organisations are not calling for anything that looks vaguely like a recovery at all. And that is because the scale of their ambition is far too limited.

Caroline Lucas and I have suggested this morning that there is funding available, if sufficient imagination is used, for a £100 billion a year programme of investment in the UK. I am completely convinced that this is possible, and that is before any aspect of modern monetary theory is taken into account.

At the same time the demands made for accountability  are also weak, and continue the myth that this can somehow continue outside the mainstream of financial reporting, as if climate change is an optional extra, when it is absolutely core to our future. We need  sustainable cost accounting now.

I regret to say that in that case I find this call rather depressing. If climate NGOs are not going to be ambitious now whenever are they going to be? We face the biggest crisis we’ve ever known, which is simultaneously the necessary basis for change and what we have got are demands for 100,000  jobs when many, many times more are needed, and could be delivered.

Are we really going to let another crisis go to waste?