Stephanie Kelton was on Channel 4 News last night. I recommend watching. She is, undoubtedly, the best exponent of modern monetary theory that there is. She offered a clear and reasoned explanation.

When asked who was going to pay for the coronavirus crisis she said very clearly that in the US the Federal government was, which is true, just as the ECB is in Europe and the Bank of England will in the UK.

Stephanie was up against Niall Ferguson. He disagreed. he said there will be a cost to pay, and that government will have to repay the debt created. In the process he claimed that from 1945 to the 1970s the US government repaid debt to pay for WW2 by running surpluses, which would imply the debt was repaid.

Stephanie flatly told him he that he was wrong. I suspected that he was. I went to the Congressional Budget Office to find out. These are their charts: 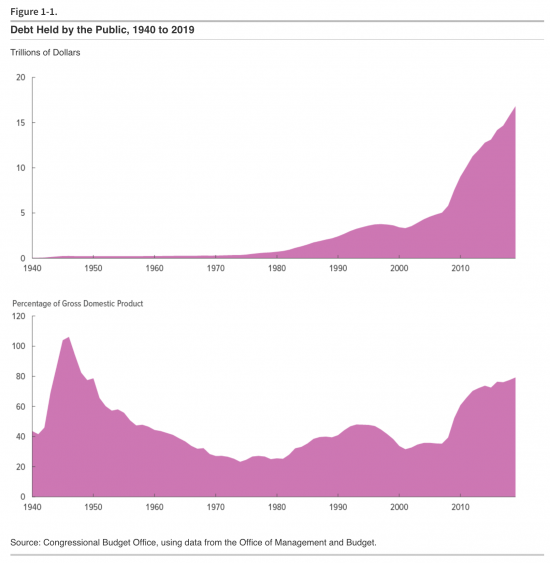 It's true that as a proportion of GDP debt held by the public fell. But as Stephaine noted, that's because GDP rose so fast. Fergusson was clearly confusing the two issues. It's a school student error.

But, to make sure I examined that very long flat line up to the 1970s in the first chart and downloaded the data. This is that chart in more detail, cut short at 1980: 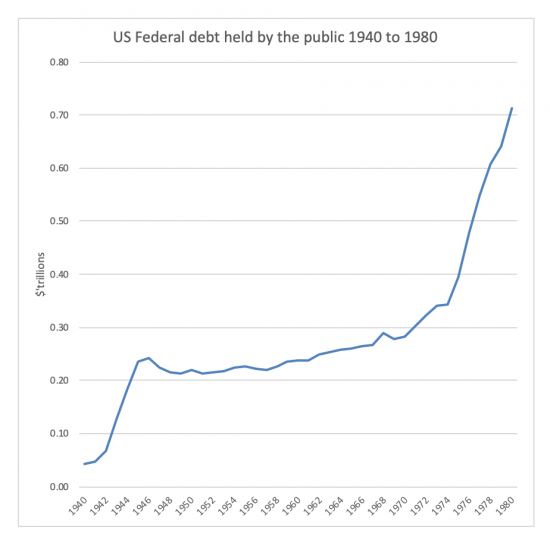 Fergusson was, in other words, talking complete and utter nonsense. The US fed did not run surpluses for decades to pay for the war. It did not borrow much for a while, I agree, but then it did not need to because US government taxed in those days, with corporations most especially paying a fair share. But his claim is still simply untrue: it did not repay any significant debt. And overall it borrowed, with the upward trend being marked from 1958 onwards.

So much for being an expert: he appears to have had not a clue what he was talking about.