I predicted, very early on in this crisis, that consumers would react to it the way that consumers always do in situations such as this, which is that they would save.

Data in the FT suggests that I was right: the tendency to save has been very pronounced in five EU countries: 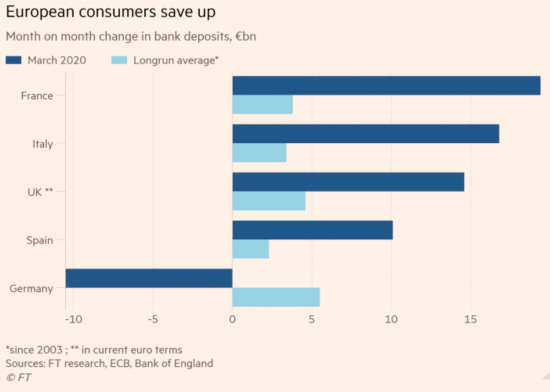 Deposits are up heavily, excepting Germany, where in crises people withdraw cash heavily by tradition, and literally stash it.

Of course it can be said that this data was for March and so abnormal and that things will to back to normal. But that is exceptionally unlikely. That is not what happens. When people have suffered a profound shock, and it is beyond dispute that they have, they do not trust a return to normality, and so continue to save for some time. And as job losses mount - as they surely will - this will be even more likely amongst those still with an income.

The fact is that saving will now be the new normal.

I wrote about the use of savings last November: 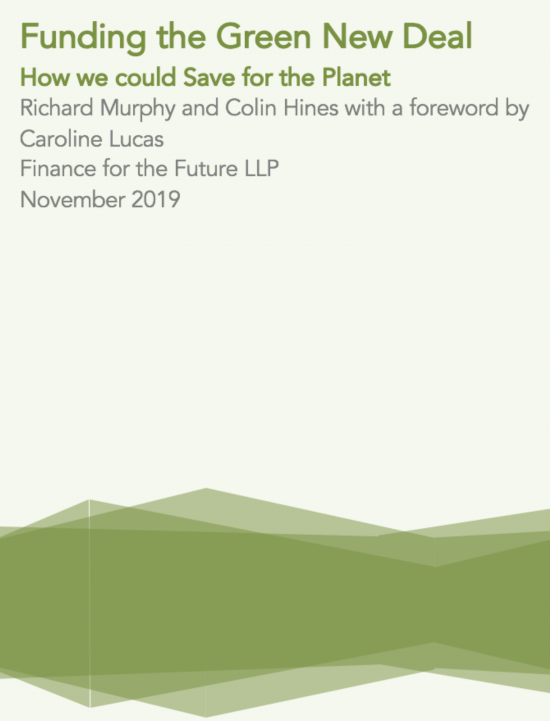 As I noted then:

In a new report entitled 'Funding the Green New Deal: How we could Save for the Planet', Richard Murphy and Colin Hines, who are both members of the Group that wrote the first Green New Deal report in 2008, seek to answer that question. As they show, over 80% of UK financial wealth is held in tax incentivised accounts, whether they be pensions or ISAs. As a result it is to these sources that they look for the funding. What they suggest is that by simple changes to the tax reliefs applicable on both types of account up to £100 billion of funds can be directed towards the Green New Deal each year. This is as much funding as anyone suggests might be needed at present.

The changes are simple. With regard to ISAs it is suggested that the government should back the issue of Green New Deal bonds paying interest at an average rate of 1.85%, which is the average UK government cost of borrowing at present, and it is only these that should be available to ISA savers in the future. This could raise up to £70 billion a year in funds.

Taken together the measures would ensure that tax reliefs are aligned to society's need for a Green New Deal.

Caroline Lucas, who has been the Green Party MP for Brighton Pavilion since 2010 and who is standing again in the current election, has written a foreword to the report. In it she says:

"As Murphy and Hines remind us, people investing in pensions and savings will largely be from older generations who can thus play a vital part in the Green New Deal. They can save for their own benefit and at the same time benefit all of us, and in particular, younger generations. This inter-generational rebalancing could be another key element of the Green New Deal, and merits further investigation. Working together, we can create a better future. For all of us, and for the planet we share."

The report is available here.

If the new savings that people now want to make were redirected for social purpose then there would be a way to use them to keep jobs going and build the future we really need.

But will the government do this? I wish I could be confident that they will.