We’ll be just fine so long as no one, anywhere, anytime, thinks that we have to repay the government’s so-called debt. Because in this crisis that is the one thing we will not need.Â

I have just posted these comments as a twitter thread, which is why they are written in the short form that they are in:

The UK government has just borrowed £62bn in a month, which is more than it planned for the next year. People are sending out panic signals. They’re suggesting the gov’t has a crisis. But that’s not true. That needs explanation.

Third, there is no debt crisis. This year the gov’t has already bought £200bn of gov’t debt back from markets and is expected to do another £100bn soon. That means that right now the government owns at least £575bn of its own debt.

Fourth, if the gov't owns £575bn of its own debt that means it never has to repay it or pay interest on it. What's more it means total debt was actually only £1.23trn in March this year, and not the £1.8trhn the gov't claimed.

Sixth, it will take more than £1 trillion of borrowing on that basis to make the debt 100% of GDP. And that won't happen because there will be more QE before we get anywhere near that.

Seventh, the QE already done also explains how the debt is being bought right now: the gov't has already injected the money into the financial markets to provide the cash so they can buy this debt. So there will be no debt crisis.

Thanks goodness for the good old magic money tree - otherwise called the Bank of England - that can produce money on demand to keep our economy going as best as possible without anyone having to panic.

Keep calm in other words: the chance that this supposed new debt is a matter of any great economic consequence is close to the square root of diddlysquat.

This needs a little explanation though. This chart shows UK government gilts in issue (which some people call the national debt) from 2000 to 2020 having allowed for the fact that the government has repurchased £635bn of these gilts and there is no chance (as has now been admitted by the Bank of England) that any of these will ever be sold back into the market again: 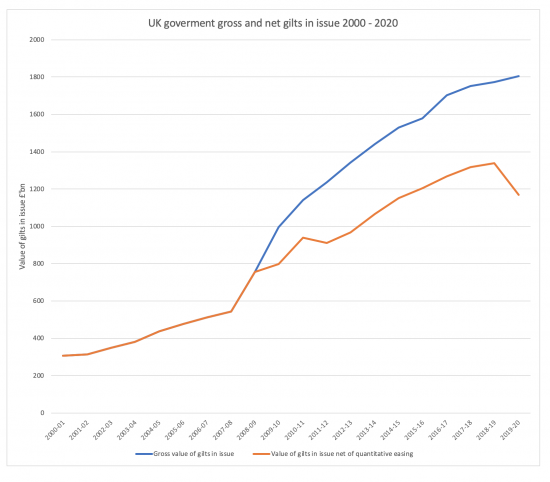 To make it clear: government debt has fallen heavily this year because of QE.

And the money that the government is injecting into the economy via QE is precisely what will now be used to buy government debt.

A game is being played still that makes people think we might have a government funding crisis.

We have no such thing.

Nor has the government done badly.

And the government is picking up the bill, because it can afford to do so, precisely because it can do something that no one else can, which is create money, of which there would be a massive shortage right now but for its actions.

We need neither panic or think we're doomed. Leave that to Dad's Army. We'll be just fine so long as no one, anywhere, anytime, thinks that we have to repay that debt. Because in this crisis that is the one thing we will not need.