I had my attention drawn yesterday to an article by someone called Sean O'Grady in The Independent. I admit I do not know who they are. I do know that what they very wrong when it comes to economics. The article is headlined:

How will Britain pay off its debts after the pandemic?

It includes this extraordinary claim:

Provided the gilts are issued in sterling, at longer maturities and the average rate of interest on the debt stays low, then there should be no immediate cause for alarm. It is like a householder with an apparently crippling mortgage: provided the interest element stays within certain bounds, and provided a healthy wage rise is enjoyed every year, the debt will gradually get paid down and will look less intimidating.

In the UK context, that means that the economy has to grow at a respectable rate, and higher than the long-term interest rate to keep the debt under control. That, in turn, depends on future levels of growth in productivity and investment, which have been disappointing in recent years. In the short run at least, Brexit will mean trade, investment and economic growth will be more sluggish than otherwise. Even with rates as low as they are, the country will still be spending more on debt interest than, say, on its schools.

I added the highlight, because this is what the whole claim appears to be building up to: either that, or more tax.

The fact is that the claim made is nonsense. This chart is from the Budget for 2020/21 published in March: 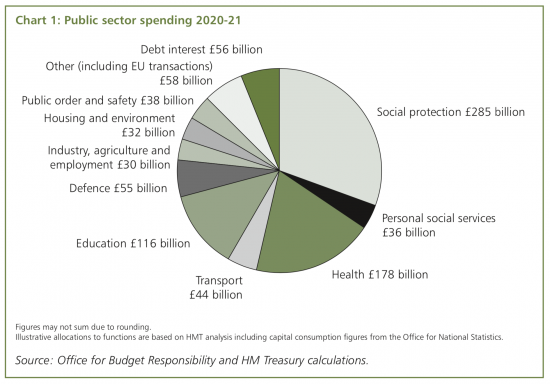 You will note that education spending - the vast majority of it on schools - is double the debt interest cost (over 70% of which recycles into the UK economy).

There are three things to know about UK government interest costs. The first is that once debt is issued the rate is fixed. So the planned cost for existing debt is not going up.

Second, it's more than a decade before most existing debt has to be refinanced, so the cost is not changing any time soon.

And, come to that, the interest rate trend on government debt is sharply downward: 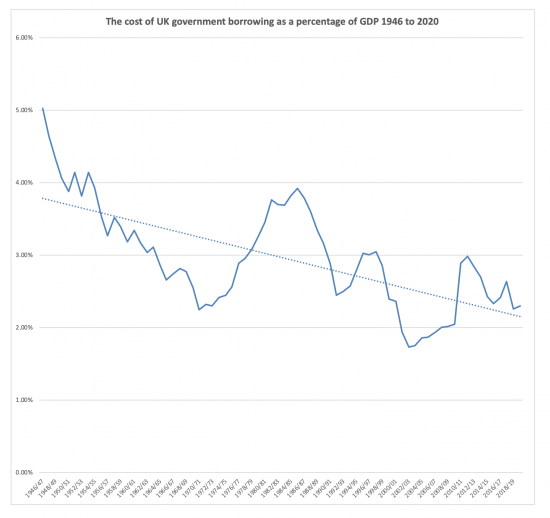 That's the average. And the current actual cost of interest on a UK ten year bond issued now is much less - at about a 0.2% nominal interest rate at present which is negative in real terms.

So, the average cost of UK government debt servicing is falling.

But this journalist claims it is going to more than double to exceed education costs. To achieve that the debt will have to significantly more than double at current rates. And none can be subject to QE (which does not carry interest charges) although £200 billion has been this year.

And the government's ability to control interest rates through QE and through central reserves would have to collapse.

And the UK's rate would have to move completely out of line with the rest of the world - where the trends are also to net-zero (or lower) interest rates.

In other words, the claim made is complete nonsense.

I'd suggest papers have a duty not to publish complete misinformation.