I am, of course, delighted by this morning's Supreme Court decision, as my Twitter feed witnesses. But opinion is divided as YouGov have found: 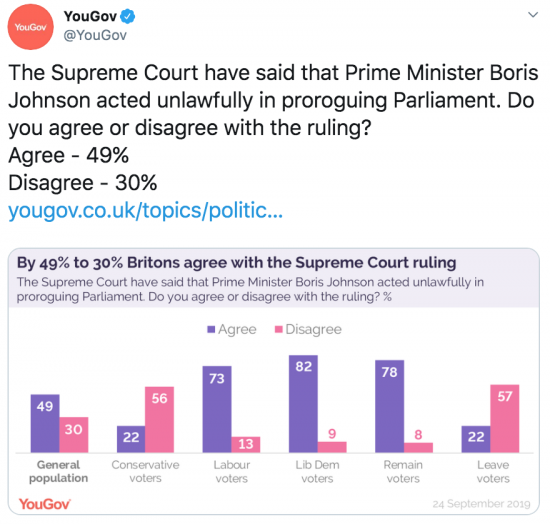 It would seem that Leave Voters are Tory voters. And now the party of law and order no longer believes in the courts. Which is quite staggering.

Not only do we have a government that will, I am quite sure, argue that the courts cannot rule on its abuse of the Royal prerogative when it is now very clearly the law that it can, but now they will argue that our Supreme Court is wrong.

This is a definition of a divided country: we cannot now agree whether there is a commonality that binds us together as a nation with one law. When that goes the very idea of what a nation is goes with it.

We're in trouble, despite the euphoria of the day, unless we can consign those who oppose the rule of law to the political wilderness.

To put it another way, we are now in the fight against fascism: let's have no doubt about it.