Amazon, tax and the square root of diddly squat

The Guardian features this article this morning: 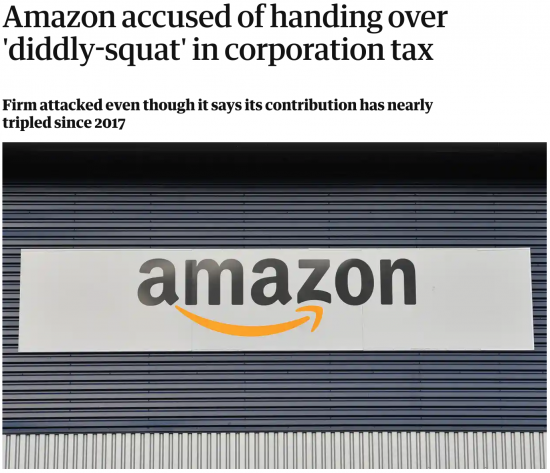 It's about the absence of anticipated tax payments by Amazon in the UK, based on reasonable extrapolation of its worldwide profits and declared overall UK turnover.

I was interviewed for the article. I am quoted:

Richard Murphy, professor of practice in international political economy at City, University of London, said: “If it wants us to believe it is paying the right amount of tax it has got to give enough information. No accounting number makes sense in isolation.”

However, Amazon tried to fend off accusations of tax underpayment by issuing a separate statement on Tuesday saying it paid £220m of direct taxes in the UK across its entire British operation last year including employer’s national insurance, business rates, corporation tax and stamp duty.

It did not break this down to reveal the amount of corporation tax paid by its UK operation, which had total sales of $14.5bn (£10.9bn) last year, according to the group’s annual report.

And that's the issue: Amazon does not give us the data we need. So I sued what is available and said:

Murphy said he would expect Amazon to pay at least £100m in corporation tax alone at its UK business, assuming that it made profits at a similar rate to the group as a whole. “There is clearly an underpayment to explain,” he said, calling the payment by Amazon UK Services “the square root of diddly-squat”.

I joked that the journalist would not use that comment. I was wrong. But I'm right about this:

Murphy said the company would be under pressure to publish more transparent accounts as it was becoming normal practice for companies to “reveal and explain” their tax bills.

It's time for full disclosure and country-by-country reporting on public record. Nothing less will do.