I know it's an opinion poll. I know it's the European elections. I know these things can be wrong. I know that it's YouGov. I know it's from the Times. I know how to get my excuses in early. I still think this is pretty staggering: 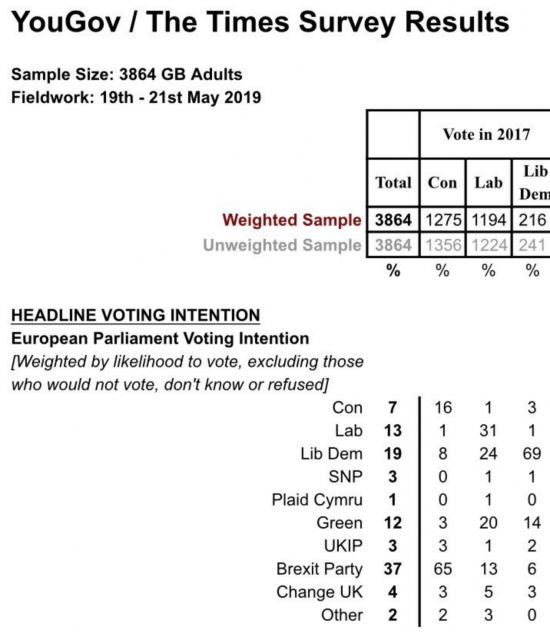 The Tory collapse is staggering. Labour's position is little better. Remain parties just outdo the Brexit Party. And the far right lead, overwhelmingly in the UK.

Do I much care if the Tories fail? No, not really. They have brought it on themselves.

Corbyn's prevarication has done for Labour: a lot of people can have very good reason for being deeply angry about that. As a strategy it has failed, dismally. Surely nobody can disagree now?

And I am pleased to see the Remain parties coming through.

But the rise of fascism has been something I have feared for a long time. And what we now have is a party made up, in the main, by far-right candidates, led by a person who has refused to issue a manifesto and will not tolerate having a membership of his organisation, taking the lead in an election in this country. If you're not depressed by that you do not believe in democracy, and all that this country was once about, but is no longer because of neoliberalism.

In England, at least, we are heading for a long dark night in our political history.