The FT has an article by Jonathan Ford this morning headlined:

Accounting has become the opposite of useful for users

That is a big claim to make. It is evidenced using a paper by Andrew Smithers, sometime of the FT I think, who presents two arguments.

The first is that if accounts prepared using US generally accepted accounting principles or International Financial Reporting Standard  (and in many ways the two are very similar) were useful then there would be no need for companies to make use of non-GAAP or IFRS reporting measures. However, in practice there has been a massive rise in their use and there must be good reason for that. It is that GAAP and IFRS do not provide what the companies themselves think to be useful information.

The second argument is that if the accounts US GAAP and IFRS produce were useful then they would present a picture broadly similar to that portrayed by national accounting data, which is still thought to be broadly reliable. The arguiment is that they do not. The divergence looks like this: 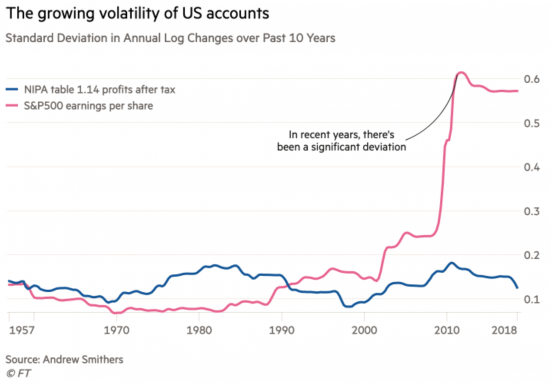 You could, of course, argue that this is a downturn phenomenon. It is not. International Financial Reporting Standard came into use in 2005. The same 'mark to market' and 'fair value' basis of accounting became commonplace in the US at about the same time. And what it has permitted is accounting that leaves reality behind. The failure to predict losses and the ability to bring forward profits that IFRS and US GAAP permit has resulted in accounting offering a view of the world that national income accounting cannot sustain. To put it another way: it's a false view of the world.

Who is to blame?

First, government for abandoning its duty to ensure proper accounting standards are in place.

Second, the accounting profession for the same reason.

Third, the Big 4, who largely drove both processes of change in the interests of their clients and who created both false accounting and a redefined concept of audit that said that the audit process merely required confirmation that this false accounting had been used.

Fourth, the investment community, for not shouting about this for too long, if at all in most cases. They have been complicit in the falsehood that profits are greater than they have actually been for their own self-interested reasons.

What is required? A while ago I suggested that I was creating a Corporate Accountability Network to propose an improved accounting framework. That is what is required. I just need some funding.