Why does a falling FTSE matter?

Does a falling FTSE matter? This was yesterday's chart: 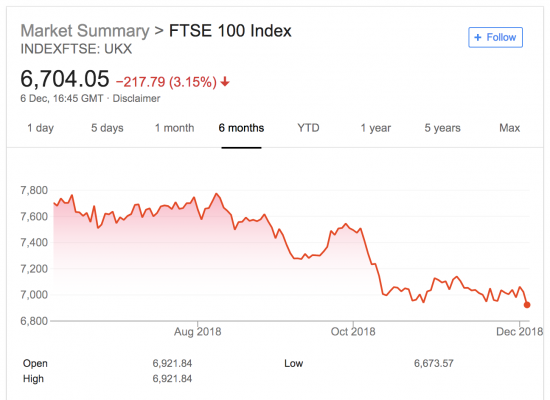 At one level the fact that the FTSE has been in steady decline and took a tumble yesterday is inconsequential. Few companies are dependent on stock exchanges to raise funds. Long-term investors sit out such bumps, presuming that cash will flow in their direction, eventually. And for the day traders, downsides provide as much chance to make money as the upside: for them it is volatility that matters. In that case it is possible to say 'so what?' to yesterday's blip that followed the blip of the day before, and which might be reversed today (who knows?).

And yet it does matter. We live in a world where there is a lack of confidence.

People do not have confidence in their jobs, and so their financial security.

People do not have confidence in their politicians.

Or their countries, where some at least see their cultural identities as under threat.

Whilst many more wonder how we can survive climate change, maybe with good reason.

Some lack any confidence they will ever get a secure home.

In the midst of all this on the hour, every hour, news bulletins pump out FTSE 100 data as if it really matters. After all, why report it if it does not? People are told to think it matters.

And some do believe it matters. Trump did. He's in trouble as a result.

Politicians who obsess with growth use it as a proxy for that.

And a rising stock market is used as a proxy for a brighter future because, after all, that's where most people's pension saving goes.

For that precise last reason, for those with conventional savings arrangements (and that is most savers, but they are not by any means the majority of the population) this does matter. The value of the FTSE 100 is a proxy measure of their well being. It does not matter if they know the precise relationships that do that. It does not even matter if that is not really true. Political and social expectation is that we should save, and I stress, save and not invest. And the pressure to do so is continually reinforced, not least by the tax system, which provides considerable encouragement to do so. At the same time the whole financial services industry issues daily warnings that the value of what they inappropriately call investments might go down, whilst acting as if that is entirely untrue. The pressure to believe in the FTSE is high.

And so let's ignore the reality of its limited role in the real economy. And let's just treat it as an indicator of confidence. Put like that the FTSE does what most of us do, in that is it builds confidence slowly. And it also behaves like us, in that faith can be lost very quickly.

I have no idea whether or not real faith is being lost right now. But Trump; trade war; Chinese disputes; destructive protectionism; Brexit and other factors all give very good reason to think faith could be lost. Of those Trump is most especially significant. And the markets are sending a signal, which is that they are not sure what he is doing.

For a man who has based part of his appeal on rising stock markets that should matter. It probably does. If he understands as little as some suggest (and I do not know the truth here, but the reality is that his evidence base for action is usually pretty limited) a decline in US markets, which is also happening, matters to him.

Or does it? What of those without savings? For those who support his alternative vision maybe the USA stock markets are just part of 'the swamp'. And they do not matter. Trump could try to ride this out on that basis. I am not sure he could succeed, but the rise of populist politics that can sometimes (but not always) ride on a sentiment that what is good for the financial elite is not good for the rest (and vice versa). So, a stock market decline on this logic could be a gain. That might still be used by him to sell this as a win.

My point is then? Simply that by itself a fall in the FTSE (and other markets) does not matter much, technically. But actually, because we have given it such inflated status (in every sense) it most certainly does, and the consequences are unpredictable, most especially if someone like Trump over-reacts to it.

The truth is when you think the wrong things are of value then things can go wrong. And we do think things like the FTSE are or value. And the consequence is an obsession with growth because nothing must threaten its rise. And that is wrong.

The FTSE may well need to fall in value, considerably.  The world can in theory survive that. But like so much else, it's whether it's confidence can survive such a change when it is already so vulnerable that really matters. And on that I do not know the answer.