Danny Blanchflower and I agree: Mark Carney’s seriously fluffed it this time

Danny Blanchflower and I had a fun conversation last night. It’s always good to talk with him, even if most of the time we’re two strongly opinionated economists swapping views separated by the width of a fag paper.

So we agreed there was no reason for a rate rise yesterday.

After which we agreed it must be egos or Brexit that drive it.

And we agreed that the fact that the decision was unanimous was deeply suspicious: groupthink has a dangerous history at the Monetary Policy Committee.

That said, we were unanimous that we’d have proposed a cut in rate to signal to the government that there is a strong need for fiscal intervention by them and that the Bank is out of firepower to deal with the issues we face.

So what is the biggest issue? We discussed this, of course. Growth at 1.5% and that the Bank now thinks that’s overheating could be one such issue. When the economy is in need of the sort of transformation that only serious investment (and so, of course, continuing low interest rates) can bring them to have the poverty of aspiration that the Bank has displayed is dire.

But worse is their view on wage inflation. This is where Danny is the real expert. I doff my hat. So should Mark Carney. Danny, and his colleague David Bell, have a new paper out on why despite the fact that the world’s economies are supposedly at full employment we are not seeing the inflation that the so-called Phillips Curve predicts we should be suffering.

Danny’s explanation (if I can summarise it) comes in just two tables. The first is this: 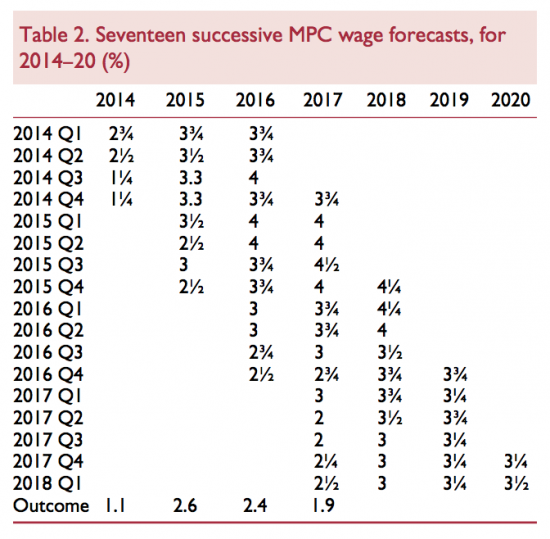 To not be too unsubtle about it, the Bank’s ability to forecast on this issue is dire, as Danny and his colleague have shown. They persistently overshoot in their forecasts, and appear not to have learned any lessons from doing so. I entirely agree with Danny that this is happening now.

Danny and I also agree on the fact that the Bank is just wrong to maintain that we are near full employment. Both of us have done work on self-employment and the disguise it provides for under-employment in our time. I have no doubt this is happening now. In the same paper I have already noted Danny and David Bell look at the issue of underemployment being disguised by involuntary part-time employment i.e. those recorded as being in employment but who would wish for more hours than they are currently able to work, usually shifting them from part time to full-time work. This is a critical issue. And it is widely prevalent, as this (the second) table shows: 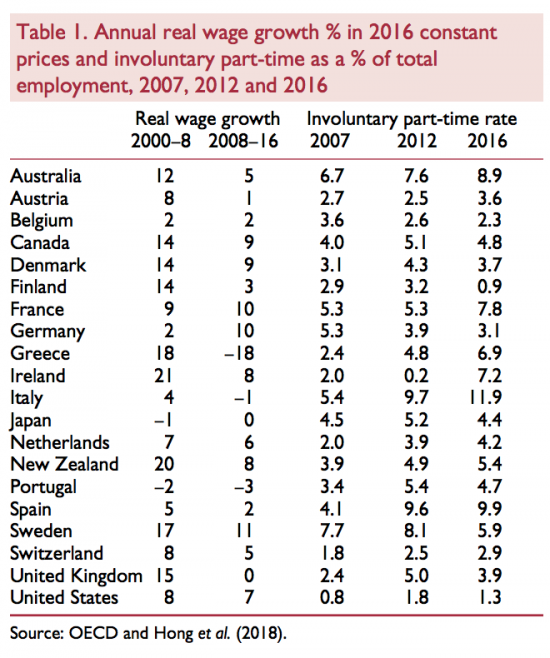 The implication is obvious: we are not at full employment, or in our mutual opinion, anywhere near it.

But that brought us to another theme, where again I bow to Danny’s expertise. This is the so-called NAIRU - that is the non-accelerating inflation rate of unemployment. It’s not that long ago that the bank thought this was 8%. Then it was 7%, then 5%. Now it’s about 4.5% on their opinion. But why? As Danny explained, when researching a new book out next year from Princeton entitled ‘Not working: where have all the good jobs gone?’ he looked at NAIRU since 1945. He says as a result that it’s quite fair to argue that from 1947 to 1958 it was 1.5%. Of course the world has changed since 1958 (excepting the fact that’s when I arrived in it). And the profile of employment has changed radically too. But why has NAIRU changed? Or has it? Could it be argued that it is now no more than 2.5%? I think that plausible. And, we agreed that NAIRU should be measured when those in employment have the hours they want and are being paid persistently, at a living wage rate (at least). If that’s the case then for the Bank to claim we are at full employment now is as likely to be as wrong as their wage inflation forecast, on which we can place a near certain probability of overstatement.

To summarise, if Danny and I are right, and as I said, it was hard to find a point of disagreement between us, then the Bank of England are massively wrong in their forecasts on employment and wage rate increases. They are also wrong on growth, because they are presuming there is no capacity for it when that is just untrue. So what chance their inflation forecast is right? Near en0ugh none at all, if external factors are excluded from consideration.

But in that case what they have done is send out profoundly worrying messages. I mentioned some of these yesterday, but I will reiterate them.

First, they are sending out a message that they are out of control: they are issuing forecasts that do not accord with observable facts.

Second, they are making decisions on the basis of those observably incorrect facts that appears to be inappropriate as a result.

Third, that then undermines the credibility of a so-called independent central bank. It is well known that I have little belief in this idea in any event. But when they actually can’t do their job properly any vestige of worth disappears.

Fourth, you have to then wonder what they are really doing (especially with 9-0 decisions for an idea as far off-beam as this one) and that fuels conspiracy theories. We could really do without more of them.

Fifth, whatever claims are left for monetary policy are shredded, but when fiscal policy is not (as yet) getting a look in that leaves it appearing that no one has a clue how to manage the economy. We are out of control.

And, sixth, as an economy boost before the inevitably of a poor Brexit (on which, at least, Carney was appropriately clear) this is a complete failure.

Worry. I reiterate that advice.

And look forward to Danny’s book.

We have agreed we should talk more often: it’s always fun, even if self-confirming. But I strongly suspect we’re right this time. And it’s good to be so in good company.