The Office for Budget Responsibility does not do macroeconomics, as its Fiscal Sustainability Report painfully proves

I have been asked on Twitter whether I have read the new Office for Budget Responsibility report on the long-term fiscal sustainability of the UK, published last week. The honest answer when I was asked was 'no', but I logged the request and what better is there to do on a lazy Sunday evening than settle down with an OBR tome?

The nub of the forecast is that there are going to be more of us and we're all going (on average) to live longer: 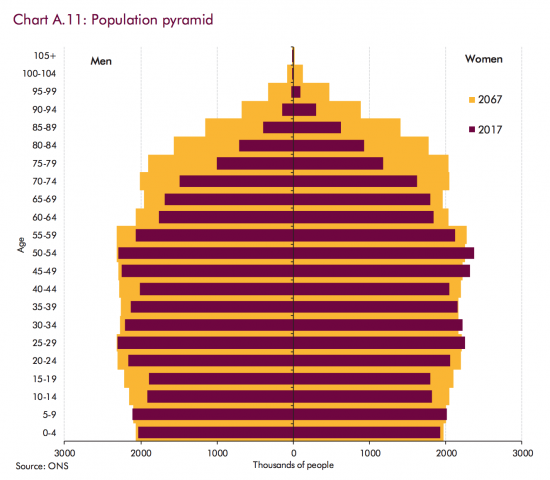 The result is that health spending is going to grow considerably as a proportion of GDP: 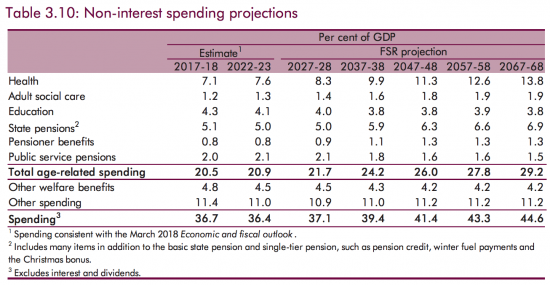 But note, not much else is going to change - especially beyond age-related spending. Still, government spending will be up.

Despite this massive change in the age profile, employment rates are not going to decline much: 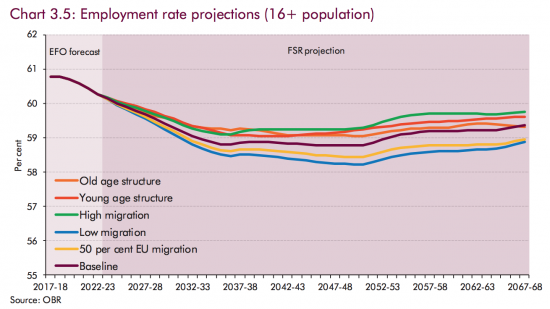 And note migration does not massively change that.

But despite all this the proportions of tax revenues raised to GDP are going to be massively consistent:

As a result of which government borrowing is going to rise steadily: 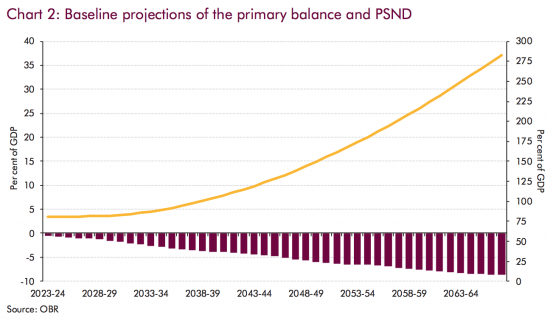 And I have to be honest, that by the time I had got to this I was beginning to give up the will to live.

Let me explain why. In a nutshell it is because this forecast is nonsense. What it assumes is that the government is a business operating in an economy on which the government's decisions have no impact. Let me be clear, I have prepared projections in my time for which such an assumption is appropriate. That assumption will, in fact, be true for the vast majority of businesses in the UK. But it is a wholly inappropriate assumption to be made in a forecast of this nature for the government as a whole. What the government does change the economy: the two are not independent of each other. Sheer scale makes that clear. So too does the fact that the government is the currency issuer. And the only agency that can tax. But the OBR does not seem to have noticed this.

I should explain that there is reason for this. That is that the Office for Budget Responsibility is made up mainly of exiles from the Institute for Fiscal Studies who famously say they 'don't do macroeconomics'. That is painfully apparent here.

Let me take one simple example. Health care spending as a proportion of GDP is to nearly double according to the OBR in their projection. The increase is 6.7% of GDP. But, they say, VAT revenues as a proportion of GDP will also rise. And that is not logical. Because there is no VAT on healthcare. And so the amount of VAT recovered as a proportion of GDP should fall given how material the first assumption is. But apparently, the OBR can't make the link. That's either because they are very poor at financial modelling (it would really not be very hard to program an assumption on this: give me a few minutes and I would do it for them) or, alternatively, they're assuming that whatever the government does has no impact on the economy as a whole.

I strongly suspect both my observations are true. With regard to the latter the confirmation comes from one simple search of the document. I searched for the word 'multiplier'. In other words, I looked to see what assumption the OBR was using to explain the relationship between the additional government spending they are forecasting on healthcare and overall growth. What I was looking to find was an explanation as to whether they thought this would add to, or subtract from the growth potential in the economy, and why. This would, after all, seem to be the absolutely fundamental assumption that underpins any projection of this nature. But the word is not to be found in the document. Not once. Not even in a footnote. So this is not macroeconomics as we know it, at all.

In which case let me summarise this projection with which they have sought to scare the populous at large, to no doubt support the OBR / IFS view of the ongoing need for austerity. What they are saying is that because the government has had the temerity to think it must look after the UK's healthcare needs we will all be going to hell in a handcart due to an unsustainable burden of debt.

First, let's make clear that the OBR shows not the slightest understanding of what debt really is. They just don't get modern monetary theory.

Then let's note that they must know that their assumption on tax is crass: they know that eventually funding without tax increases creates inflation as full employment is approached, but they ignore such issues in their entirety.

Just as they ignore the fact that spending in this way will add to UK growth since we are not at full capacity in our economy at present.

Whilst also ignoring that because those engaged in this activity are well paid, on average, that this spending might increase the overall tax take.

None of these things are noted.

Nor is the fact simply removing the stress of old age from people's lives increase their willingness to spend.

Instead, the OBR hold everything constant and say we can't afford to provide healthcare without massive tax rises.

The result is that this might be politely described as a crass piece of work.

And candidly, if this is the best they can do they need to be replaced.