Who is more powerful â€“ states or corporations?

This article was originally published on The Conversation. Read the original article. I thought it worth sharing:

Who is more powerful — states or corporations?

Who holds the power in international politics? Most people would probably say it’s the largest states in the global system. The current landscape of international relations seems to affirm this intuition: new Russian geopolitics, “America First” and Chinese state-led global expansion, among others, seem to put state power back in charge after decades of globalisation.

Yet multinationals like Apple and Starbucks still wield phenomenal power. They oversee huge supply chains, sell products all over the world, and help mould international politics to their interests. In some respects, multinationals have governments at their beck and call — witness their consistent success at dodging tax payments. So when it comes to international politics, are states really calling the shots?

We compare states and corporations based on how deep their pockets are. The following table ranks the 100 largest corporations and countries on the basis of their revenues in 2016. Revenues in the case of states is mainly collected taxes.

States occupy the top rankings, with the US first followed by China and Japan (the eurozone ranks first with more than US$5,600 billion if we treat it as a single political entity). But plenty of corporations are on par with some of the largest economies in the world: Walmart exceeds Spain and Australia, for example. Of the top 100 revenue generators, our ranking shows 71 are corporations. 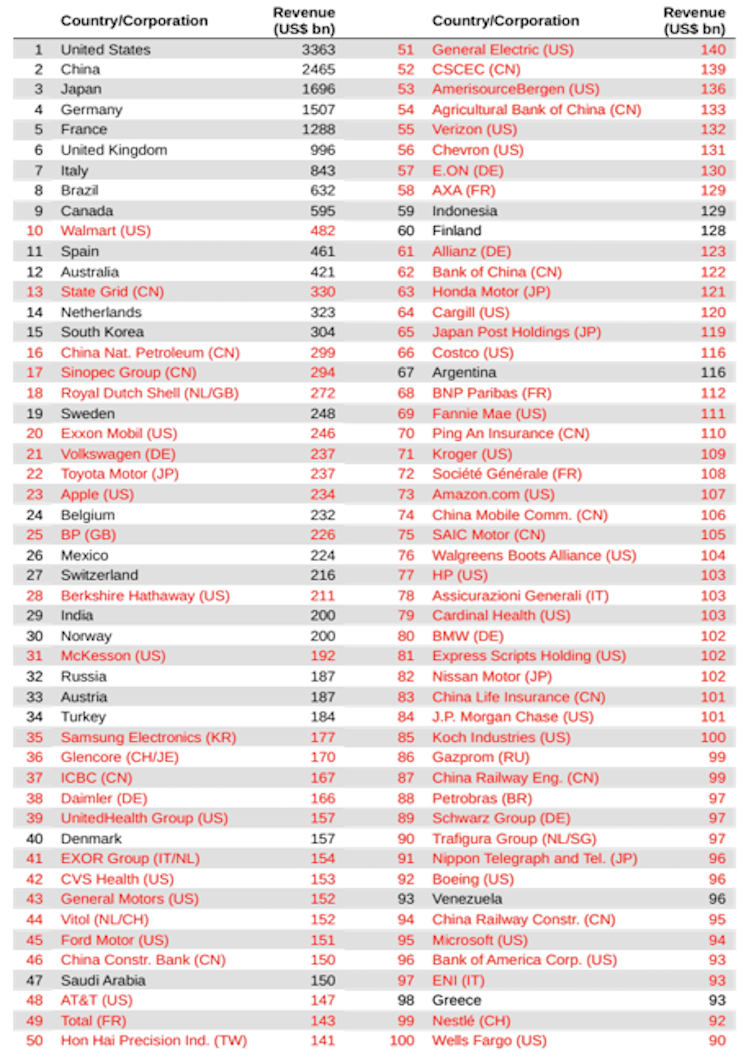 Notice also that the top ranked corporations follow the same nationality-order as states: America’s Walmart is followed by three Chinese firms. There are already 14 Chinese firms in the top 100, though the US has 27.

Our comparison is necessarily crude, but suggests that besides the very largest states, the economic power of corporations and states is essentially on par. This prompted us to try and rethink corporate power in international politics in a recent paper. We argued that globalisation has brought about a global structure in which state power is not the exclusive governing principle anymore.

Just think about the private and public power of global giants like Google or Apple. When Donald Trump recently met Apple chief executive Tim Cook to discuss how a trade war with China would affect Apple’s interests, it demonstrated that the leading multinationals are political actors, not bystanders.

There always existed big and powerful global corporations — the Dutch East India Company dominated European trade in the 1600s and 1700s, for instance. But global corporations’ current power position vis-Ã -vis other actors is unprecedented in terms of sheer size and volume.

State power did not disappear with globalisation, but it transformed. It now competes with corporations for influence and political power. States use corporations and vice versa, as the following two examples illustrate: offshore finance and transnational state-owned enterprises.

To start with offshore finance, global corporations use different jurisdictions to avoid being taxed or regulated in their home country. Lost taxes due to profit shifting could be as high as US$500 billion globally. When states position themselves as tax havens, they undermine the ability of “onshore” states to tax corporations and wealthy individuals — a cornerstone of state power.

Besides tax havens, numerous EU governments have become notorious for offering “sweetheart deals” that reduce the tax burden for specific multinationals to an astonishing extent. Also, our CORPNET research group at the University of Amsterdam recently identified five countries who play an important additional role in facilitating tax avoidance: the UK, the Netherlands, Switzerland, Ireland and Singapore. Each enables multinationals to shift investments at minimum cost between tax havens and onshore states.

Turning to our second example, states have grown as global corporate owners in recent years. They now control almost one quarter of the Fortune Global 500. By investing in state-owned enterprises beyond their borders, states gain strategic leverage vis-Ã -vis other states or actors — Russia’s gas pipeline holdings via Gazprom in eastern Europe are a good example. This has led some observers to diagnose a potential transformation of the liberal world order through “state capitalism”.

The below diagram shows the aggregated numbers of transnational state-owned enterprises or TSOEs owned by each country. The nodes represent states as owners: the bigger and darker a node, the more companies it owns outside its borders (click on the picture if you want to make it bigger).

Notice the paramount position of China (CN), which controls over 1,000 TSOEs, including the likes of Sinopec and ICBC China. Countries like France (FR) and Germany (DE) are also prominent owners, but their connections to China highlight that they are targets of TSOE investment, too.

It starts to become apparent that international relations are anything but a one-sided story of either state or corporate power. Globalisation has changed the rules of the game, empowering corporations but bringing back state power through new transnational state-corporate relations. International relations has become a giant three-dimensional chess game with states and corporations as intertwined actors.

This transformation of the global environment is probably here to stay and even accelerate. Washington recently blocked the large Chinese telecommunications manufacturer ZTE from access to critical American suppliers, for example. It did this to gain advantage in trade negotiations with Beijing. The Chinese Sovereign Wealth Fund then withdrew its longstanding investment in the American Blackstone Group following Trump’s push for economic sanctions on China.

We live in an era where the interplay between state and corporate power shapes the reality of international relations more than ever. In combination with the current nationalist and protectionist backlash in large parts of the world, this may yet lead to a revival of global rivalries: states using corporations to achieve geopolitical goals in an increasingly hostile environment, and powerful corporations perhaps using more aggressive strategies to extract profits in response. If this is where we’re heading, it could have a lasting impact on the world order.