In current cash terms that is expected to grow to £2,116 bn the following year. That is a nominal increase of 3%. 1.5% of that is real growth. The rest is forecast by the Office for Budget Responsibility to be the result of inflation.

In April this year M4, which is the broad measure of UK money supply, was £2,356 billion. That M4 is greater then GDP is normal. It had risen by £45 billion over the previous year.

I make the point for a reason. That reason is to note that we need new money creation each year. Money can only be created in two ways. Banks can lend it. Or the government can create it by running deficits.

Right now the government is aiming for and achieving a current fiscal balance: it is balancing its books on day to day spending. It is borrowing for investment, but not to cover current spending.

The aim of Chancellors for almost a decade now has been to reduce borrowing to zero: in other words, to withdraw from new money creation.

That means the private sector has to go increasingly into debt to fund the creation of the new money the economy needs. The risk of a private debt crisis is increasing as a consequence. This is the Office for Budget Responsibility forecast on debt from March 2018: 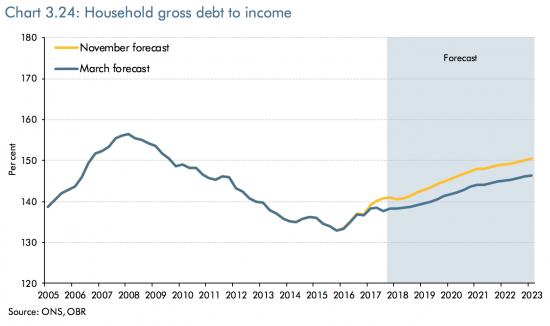 Debt stress is growing because the government will not be sharing the responsibility for creating the new money the economy needs by refusing to run the deficit that is necessary to create it. The result will be increasing financial vulnerability for millions of households.

Government financial irresponsibility does not get much bigger than that.

Deficit funding the NHS by £20bn a year could help rebalance this equation and help maintain the solvency of millions of households at the same time.

That is what a responsible government would do. But we don't have one of them.