HMRC’s failure to come to terms with the tax gap represents gross negligence on its part, and that of its political masters

The government was not meant to make any announcements yesterday so that nothing distracted from the Grenfell Tower anniversary. So HMRC published their latest tax gap data, which has always previously been published in the autumn.

As I mentioned in a blog post last night, the gap is supposedly £33bn. That, however, is hardly surprising. This is the history of this data: 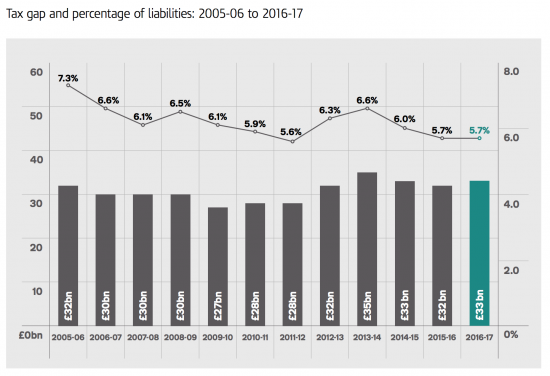 The mean gap is £30.8. Adjust a little for inflation and it was bound to be about £33bn. I hate to say that I think the figures are manipulated, but I believe that they are.

This is the supposed break down of the gap: 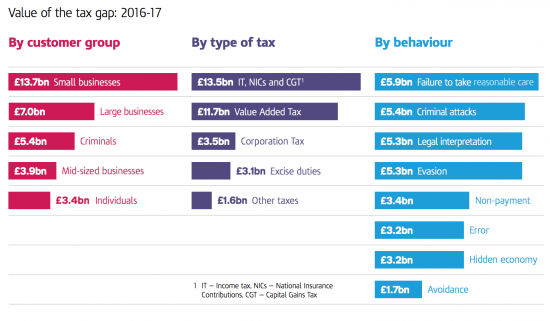 Some of these figures are obviously absurd. Tax avoidance only includes losses to schemes disclosed under the  Disclosure of Tax Avoidance Schemes rules of  2004 and subsequently.  However, we know that the number of disclosures under these arrangements has fallen considerably over the years because most tax avoidance has changed type since these rules were promoted.  That does not mean that the avoidance has ended: it just means it takes a different form, but HMRC have chosen not to measure new types of avoidance.  As result, and quite absurdly, most of the avoidance that has caught public attention in recent years is not included in these tax gap figures.

One consequence has been the increase in the amount of the tax gap allocated to ' legal interpretation'. HMRC  describe this as:

Legal interpretation losses arise where the customer’s and HMRC’s interpretation of the law and how it applies to the facts in a particular case, result in a different tax outcome. Examples include the correct categorisation of an asset for allowances, the allocation of profits within a group of companies, or VAT liability of a particular supply.

To suggest that the sums in question are lost implies one of two things.  Either HMRC's interpretation is wrong or insufficient resources are being supplied to it to make sure that its opinion can win the day. In other words, this loss is voluntarily being accepted by the government. Questions have to be asked as to why that is the case.

Then there are the losses to the shadow economy. These are stated to be £3.2bn. The overall tax rate within the UK economy is about 33.9%. This, then,  implies that about £10 billion of economic activity is hidden within the shadow economy. To put this in context, GDP was £1,984bn in 2016-17. The implication is that HMRC think that the UK shadow economy makes up just 0.5% of economic activity. This is absurd: the latest estimate of UK fraud is £190bn a year. And the latest peer-reviewed data for the IMF shows, for the last twenty years the average expected size of the UK shadow economy has been 11.08%. To put this in context the estimated percentage tax gaps are: 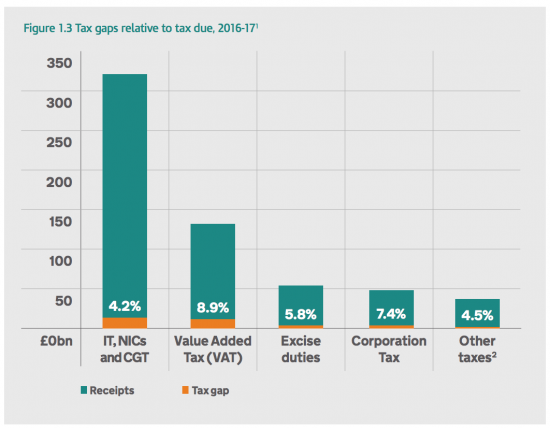 The EU, in contrast, estimates the UK's VAT gap at 10.9%, and on a rising trend. I think that considerably more likely. It also happens, and not by coincidence I suggest, to be remarkably similar to the estimated size of the shadow economy, and total fraud.

I stress that this would include the HMRC  estimates for tax evasion, the shadow economy and criminal attacks,  totalling £13.9bn.  The remaining £19bn or so would still exist on top of that loss, bringing the tax gap to not less than £87bn.

And I stress, that since HMRC do not reflect in their figures what I have suggested in the past to be considerable losses to tax abuse in capital gains, national insurance avoidance, inheritance tax non-declaration and international company profit shifting it is entirely  plausible, and very likely,  that the tax gap remains at a figure well in excess of £100bn a year.

Three things are clear.  The first is that we need more candour from HMRC. The second is that we need an independent appraisal of the tax gap: these estimates are not good enough. The third requirement is for additional resources to be made available to HMRC to tackle this issue. Whatever view of the economy and economics that you take,   this failure to collect tax represents gross economic mismanagement that has enormous consequences with regard to inequality, the supply of public services and the overall management of well-being in this country, and it is being ignored.  That represents gross negligence and it is time it came to an end.