Fair Tax is here to stay

I was speaking at the Fair Tax Mark conference yesterday, as noted here. Just for fun I dressed as a chartered accountant for the day (we accountants have a strange sense of fun). 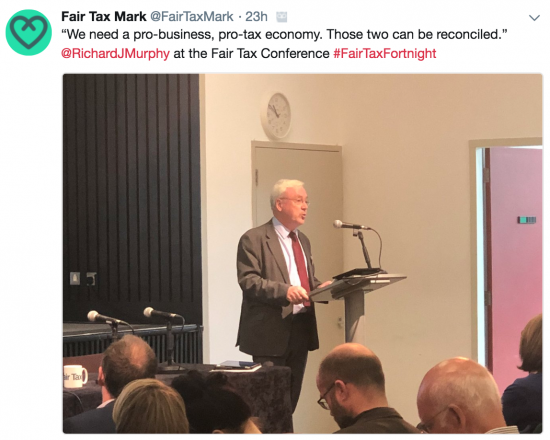 What was really interesting was how far the Fair Tax Mark has come, the commitment of Fair Tax businesses to it, and the strength of opinion that this issue will grow and grow.

New research* commissioned by the Fair Tax Mark reveals that the public want to see the UK Government intervene much more robustly to encourage responsible tax planning by business.

Three quarters (74%) of those questioned support a call for all companies, whatever their size, to publicly disclose the taxes that they do or don’t pay in the UK — with just 4% of the public disagreeing. Currently small businesses are not required to disclose their profits and taxes paid, and can file abridged accounts at Companies House.

And 6 in 10 (59%) believe that the Government and local councils should consider a company’s ethics and how they pay their tax as well as value for money and quality of service provided — with just 15% agreeing that contracts should be awarded regardless of ethics and tax conduct. Currently, tax conduct is rarely, if ever, factored into public procurement.

Three times as many people disagree as agree (49% vs 16%) with big accountancy firms such as KPMG, PwC, Deloitte and Ernst & Young being able to sell tax avoidance advice to businesses whilst auditing the accounts of those same businesses. The public now take little or no assurance from a standard audit statement. Just 1 in 10 (11%) trust a company auditor to confirm that a business is paying the right amount of tax, compared to 36% trusting an independent accreditation scheme such the Fair Tax Mark and 48% trusting HM Revenue and Customs (HMRC).

The public is split in terms of whether the Government should reduce the amount of tax companies pay in order to attract foreign investment into the country to create UK jobs. Just over a quarter (28%) say it should, a third (34%) say it should not, and 38% do not know.

And as Margaret Hodge MP said:

“The APPG on Responsible Tax is delighted to support Fair Tax Fortnight, which celebrates all the companies and organisations that are working to make responsible tax common practice. Throughout the campaign to introduce public registers of beneficial ownership, it was always our view that this was a moral issue and not a political one. The same is true of responsible tax planning, which has now become a mainstream ethical issue. We hope to see Fair Tax Fortnight become an established part of the calendar, just like Fairtrade Fortnight and Living Wage Week, where organisations that do the right thing when it comes to tax are not only recognised but celebrated.”Quite right

*All polling results are from research undertaken by ICM and commissioned by the Fair Tax Mark. The ICM Omnibus is a nationally representative omnibus survey of 2,020 adults across GB. Polling occurred between 18th and 21st May 2018. The figures have been weighted and are representative of all GB adults (aged 18+).

I should make clear that I thought up the Fair Tax Mark and am a non-execs and unpaid director of it.